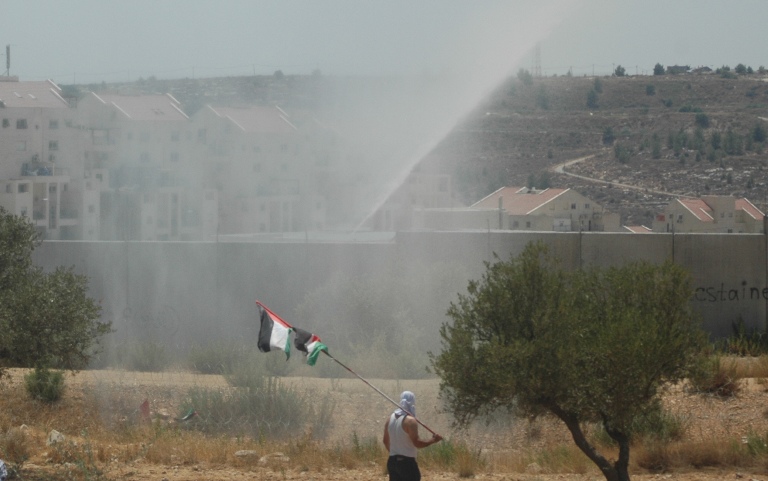 About 60 demonstrators gathered in the small village of Bil’in in the northern part of the West Bank. The gathering was part of the weekly demonstrations which take place all over the West Bank on Fridays to protest the separation barrier and the illegal Israeli occupation. Today also marked the first day of Ramadan, the Muslim holy month.Palestinians were joined by internationals from more than ten countries and Israeli citizens who included trade unionists and members of Anarchists Against the Wall.

The group marched from Bil’in up to the wall which has rows of barbed wire in front of it. The olive groves have mainly been burnt down from previous Israeli army attacks on the demonstrators.

As the demonstrators proclaimed their peaceful nature and sang songs denouncing the illegal occupation, the Israeli army responded by repeatedly spraying the people, mainly youth with ‘skunk water’ a noxious liquid. They also fired dozens of rounds of military grade tear gas into the crowd. Such actions are illegal under international law. As the army continued to attack the demonstrators, gangs of settlers watched from the other side.

The wall was erected to cut Palestinians off from their land and to enable illegal settlers to move in, who are then protected by the Israeli army of occupation.

Several people suffered from tear gas inhalation and the effects of the skunk water, but nobody was seriously hurt.