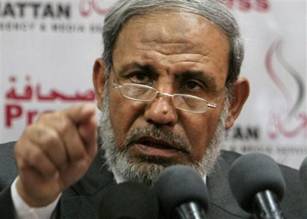 Hamas official Mahmoud Zahhar stated on Sunday that the Gaza Strip will not break away from the Palestinian Authority and the West Bank in the near future.Mahmoud Zahhar, a senior official with Hamas in the Gaza Strip, denied reports that his party intends to declare a formal separation of Gaza and the West Bank. The announcement was in response to speculation that the Islamist party in Gaza would seek detachment, rather than reconciliation, with the Palestinian Authority, reports Ma’an News.

The Gaza Strip has been separated from the West Bank by Israeli occupation for more than 60 years. It has also been increasingly blockaded and walled in since the middle of the Second Intifada. Beginning in 2007 the entire Gaza area was effectively closed by joint Israeli and Egyptian barrier fences and military patrols.

At the same time that Gaza was being sectioned off by military force the Palestinian political environment was fractured into dueling factions – Hamas and Fatah. Fatah remained in power in the West Bank through the Palestinian National Authority while Hamas wrestled away control of the embattled Gaza Strip. The two sides have been unsuccessful in attempted rapprochement and reconciliation ever since. In the meantime Gaza and the West Bank have become increasingly distinct communities.

With de facto detachment already in place many believe the next logical step is full and legal separation. Speculation of a formal breach between the two ‘Palestines’ has only been heightened by the rise of the Muslim Brotherhood in Egypt. Zahhar rejected claims that the Brotherhood is at all involved in encouraging separation, reports Ma’an.

Zahhar’s comments will do little to change the minds of those who believe that a separation of Gaza and the West Bank is inevitable.