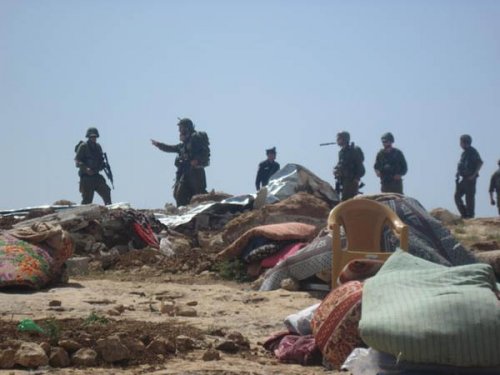 Israeli Defense Minister Ehud Barak on Sunday ordered the demolition of 8 Palestinian villages in the hills south of Hebron because the Israeli military needs the land for training exercises, Israeli newspaper Ha’aretz reported.A total of 1,500 residents will be evicted from their homes and have their lands confiscated in the villages of Majaz, Tabban, Sfai, Fakheit, Halaweh, Mirkez, Jinba, and Kharuba. The villages of Tuba, Mufaqara, Sarura, and Megheir al-Abeid, which are also nearby, appear to have been spared.

Evacuation orders were first issued in 1999, but were frozen by an injunction from the Israeli High Court of Justice. The Israeli military views the land as theirs however, and the Palestinians living there as illegal squatters according to Ha’aretz.

All of the villages in question have existed since at least the 1830s. However, all are located in Area C, which is under complete Israeli control.

This control means that Palestinians living in these villages are also not allowed to build on or improve their property in any way, as this is seen as “illegal construction” and evidence that residents are not longtime citizens but new migrants to the area. In practice this means that Palestinians do not have any way to provide for a naturally expanding population such as adding cisterns, restrooms or rooms to existing property, or constructing schools or other new buildings.

Ha’aretz also reports that the state plans to move residents to the town of Yatta as collaborators have informed them that they are actually residents there.

The Israeli military intends to use the land to train soldiers and must be allowed to conduct live fire exercises which it cannot do with residents so nearby. The article says that this is not because residents may be injured or killed by live fire, but because they may spy on the exercises or steal weapons to use for “terror purposes.”

Mass forcible transfer of protected people in occupied territory by an occupying force is a violation of the Fourth Geneva Convention and in contravention of all established international law. Exceptions are made only when there are hostilities in the area and transfer is necessary for the safety of the people in question.