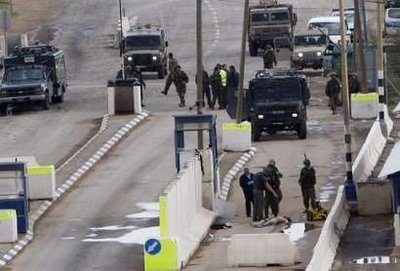 Palestinian medical sources in Jerusalem reported that one Palestinian was killed on Monday at dawn, and two others were wounded, when Israeli soldiers, stationed at a roadblock east of occupied East Jerusalem, opened fire at their car under the pretext that they did not heed to soldiers ordering them to stop.The sources said that Akram Badee’, from Beitello village near the central West Bank city of Ramallah, was moved by the army to the Israeli hospital of Hadassah in Jerusalem, but died of his wounds later on; he was hit by a live round in his head.

The two wounded residents were moved by Red Crescent medics to a local hospital in Ramallah.

One Israeli soldier was reportedly mildly wounded, likely by friendly fire, as the driver, nor that passengers, were armed.

There have been numerous similar incidents while the Israeli army and the police always ‘justified the use of deadly fire’ by claiming that the Palestinians failed to stop when ordered to do so.