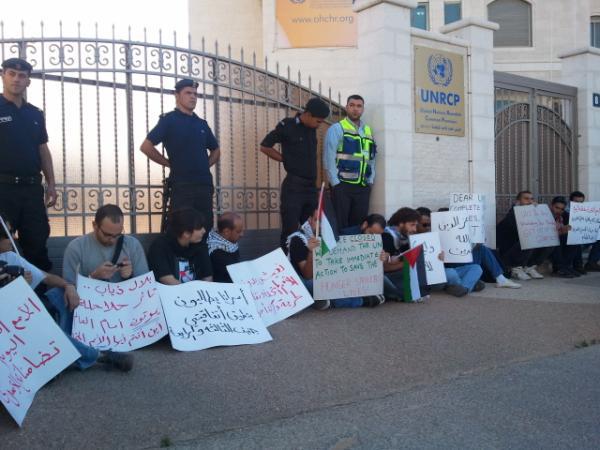 ‘It has come to light over the last week that the European Union (EU) has decided to upgrade its trade and diplomatic relations with the state of Israel despite the latter’s intensification of its occupation, colonization and apartheid against the Palestinian people. The new deal will reportedly offer Israel upgraded trade and diplomatic relations in more than 60 areas, effectively reversing the freeze that was imposed after the vicious assault of the Israeli Occupation Forces on the Gaza Strip in December 2008 – January 2009.

This latest move by the EU is nothing less than outrageous, particularly given the EU’s continuous verbal criticism of Israel’s belligerent settlement plans. This duplicitous behavior epitomizes the reasons why the Palestinian people have no faith in the EU. While some in the Palestinian leadership might have common personal interests with the EU and Israel, the Palestinian people will not accept only hollow words of condemnation.

We should not need to remind the EU that Israel continuously flouts the will of the international community, remains in breach of UN Security Council resolutions, continues to violate its international law (including IHL) obligations, and daily abuses the human rights of the Palestinian people. Whether in its settlement policies, construction of the Apartheid Wall, its ethnic cleansing and “Judaization” of Jerusalem and the Naqab (Negev), its criminal blockade of Gaza, its denial of the UN-sanctioned rights of the Palestinian refugees, its violation of the rights of Palestinian prisoners (including children), its demolition of Palestinian homes, and its countless other illegal policies, Israel is undoubtedly guilty of gross human rights abuses, deserving of condemnation and sanctions, not rewards and benefits.

In its most recent plan Israel has decided to destroy eight Palestinian villages in southern Hebron, displacing more than 1000 Palestinians, in order to have more military training grounds for its soldiers. Rather than taking measures to ensure respect for international law as called for by Common Article 1 of the Geneva Conventions, it seems that EU Member States have decided to reward Israel for its continued abuse of the Palestinian people. Moreover, EU Member States have chosen to completely ignore Article 2 of the EU-Israel Association Agreement, which is designed to deter human rights abuses by clearly stating that EU-Israel ‘’relations shall be based on respect for human rights and democratic principles which must guide internal and international policy”. These actions can only send one clear message to the Palestinian people – that our rights and lives are trivial, deserving only the occasional lip service but never meaningful action.

As Palestinian youth, we are tired of the EU’s hypocrisy and its contemptuous policies that use aid and development programs to mask political cowardice and complicity in Israel’s crimes; it has to be made clear that all the financial support going to the PA is futile when the EU offers unconditional political, trade, academic and other forms of support for Israel. The EU’s policies have only served to prolong Israel’s occupation and our oppression. The time has come for EU Member States, and the EU as a whole, to decide—to either demonstrate their support for human rights or continue their support of Israel’s violent occupation and apartheid regime and risk losing not only the Palestinian people but Arab peoples and people of conscience all over the world.

We hereby call on the EU to (1) immediately freeze the new upgrade of relations with Israel; (2) suspend the existing EU-Israel Association Agreement until Israel complies with international law; and (3) investigate and halt the work of all European companies benefiting from Israel’s occupation and settlement policies.

Barring meaningful action on the above, the Palestinian youth movement will organize to protest the latest manifestation of EU complicity and to challenge its presence and operations in Palestine.’