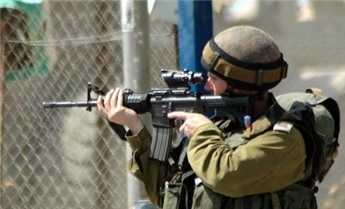 Palestinian medical sources reported that a young Palestinian man was shot by a rubber-coated metal bullets in his abdomen in Doura city, near the southern West Bank city of Hebron, and was admitted to the surgery ward where the bullet was removed.Local sources reported that Israeli soldiers invaded Doura and attacked several residents, an issue that led to clashes with local youths.

The soldiers fired dozens of rubber-coated metal bullets and gas bombs, wounding one youth identified as Shadi Salama Al-Masharqa, 22, while several residents were treated, by field medics, for the effects of tear gas inhalation.

It is worth mentioning that the army kidnapped, earlier Saturday, 21 Palestinians, including 12 fishermen who were kidnapped only 1.5 miles off the Gaza Shore, while the rest were kidnapped in the West Bank.

On Friday at dawn, one Palestinian was killed, in Beit Lahia in northern Gaza, and six residents have been injured, when an undetonated missile that was fired by Israeli during the recent war on Gaza, exploded near them.