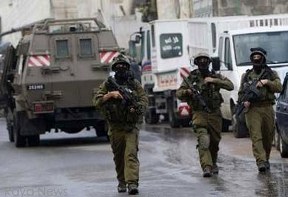 Israeli soldiers invaded, on Wednesday at dawn, the West Bank city of Ramallah and the nearby town of Birzeit town, and kidnapped nine Palestinians before taking them to an unknown destination. The Ad-Dameer Prisoner Support and Human Rights Association reported that the army invaded Birzeit, broke into and searched several homes, and kidnapped four residents, including Ya’coub Hjeir, members of the Birzeit town council.

Furthermore, Israeli media sources reported that the army kidnapped five Palestinians in Ramallah and some nearby villages, and claimed that some of the detained Palestinians are wanted “for attacking Israeli targets.

In related news, Israeli soldiers closed the Atara roadblock, at the northern entrance of Ramallah, and searched dozens of vehicles causing a huge traffic jam.

The Atara roadblock is installed on an essential area that links between Ramallah and several towns and villages in the area, and also links between the central and northern parts of the occupied West Bank.