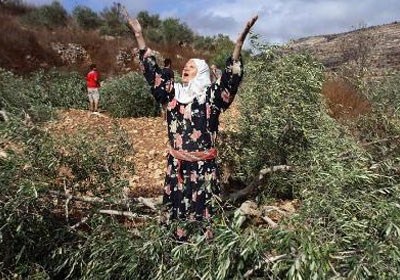 This attack is one of numerous similar attacks carried out by the settlers in the area as the settlers claim the orchard is theirs.

In related news, Israeli paper Yedioth Aharonoth reported that the Israeli justice system will start legal measures against extremist settlers who carry out “Price Tag’ attacks against the Palestinians, their homes, lands and property in different parts of the occupied West Bank.

Extremist settlers groups in the occupied West Bank are responsible for hundreds of attacks against the Palestinians and their property, and including burning and cutting hundreds of Palestinian trees in Palestinian orchards and farmlands in different parts of the West Bank.

The attacks also targeted several mosques and churches in different parts of occupied Palestine; these attacks included defacing the holy sites by writing racist graffiti, burning and attempting to burn holy sites by setting them ablaze and by hurling Molotov cocktails at them.