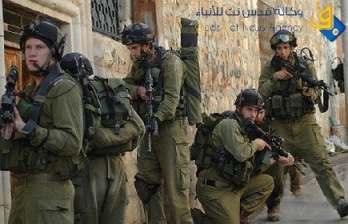 Dozens of youths hurled stones at the invading soldiers, while the army fired several gas bombs and concussion grenades; no injuries were reported.

Furthermore, the army installed roadblocks at the entrances of the villages of Al-Yamoun, Rommana, Zabbouba and Ta’nak, stopped and searched dozens of vehicles, and inspected the ID cards of the drivers and passengers; no arrests were reported.