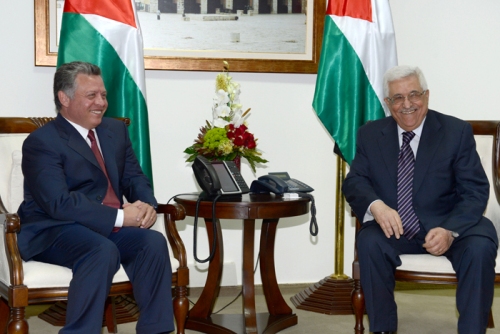 Amidst official ceremonies, King Abdullah of Jordan arrived in the central West Bank city of Ramallah and held a meeting with Palestinian President, Mahmoud Abbas, in a visit that is the first since Palestine obtained a nonmember observer state status at the United Nations General Assembly.A Jordanian official stated that this visit comes to affirm Jordan’s support to Palestine and its people, and to congratulate Palestine for the historic victory at the UN.

Following the official ceremonies, President Abbas and King Abdullah, and several senior officials of the two countries, held a meeting regarding the latest political developments.

Palestinian President Spokesperson, Nabil Abu Rodeina, welcomed the King and the visiting officials, and stated that Jordan plays an important role on the regional and international levels in supporting the Palestinian cause and the legitimate struggle for liberation and independence.

Palestinian official, Dr. Saeb Erekat, told the Palestine Radio that this visit is historic as King Abdullah is the first world leader who visits the state of Palestine.

On his part, Fateh leader, Qaddoura Fares, said that Israel is trying to isolate the Palestinian leadership for heading to the United Nations General Assembly, adding that this visit also comes to tell Israeli leaders and Prime Minister, Benjamin Netanyahu, that Palestine is for the Palestinians, and Jordan is for the Jordanians, is never and will never be an alternative homeland for the Palestinian people.

Fares said that Jordan will be coordinating with the Palestinian Authority and the Arab world to support all Palestinian political moves on the international level.