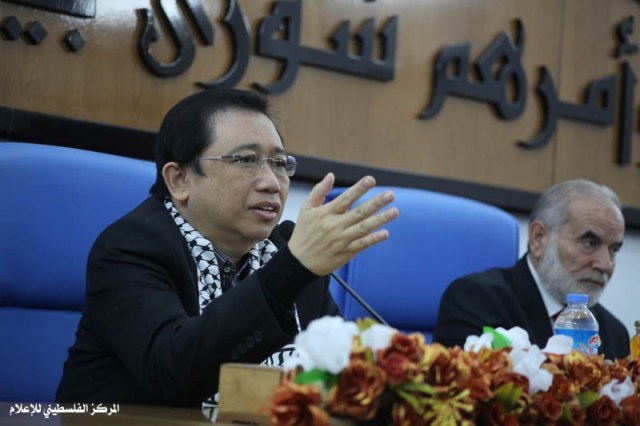 Indonesian Parliament head, Ali Marzouki, arrived in the Gaza Strip via the Rafah Border Terminal on Wednesday heading a senior Indonesian delegation to observe the massive destruction caused by Israel during its recent war on Gaza, and to express solidarity with the Palestinian people.Dr. Ahmad Bahar, deputy head of the Palestinian Legislative Council, and several legislators and government officials welcomed the visiting Indonesian delegation.

During a press conference, Marzouki said that Indonesia supports the Palestinian people and their struggle for liberation and independence, and denounced the ongoing Israeli violations against the Palestinians in the coastal region.

On his part, Bahar thanked Indonesia for its support of the Palestinians and their legitimate struggle for liberation and independence, and said that the international community needs to act on ending the Israeli occupation of Palestine.

The Palestinian Ministry of Health issued a report, Tuesday, revealing that 191 Palestinians, including children, women and elderly, have been killed by Israeli military shells in Gaza in November, and that the number of injured Palestinians in the same month stands at 1492.

The Health Information Center of the Ministry reported that 48 children, including 16 under the age of five, have been killed by Israeli missiles and shells, in addition to 12 women and 20 elderly.

The Center added that 1492 Palestinians, including 533 children (195 under the age of 5), 254 women and 103 elderly have been injured by Israeli fire and shells. 4 Palestinians were killed and several others were wounded by Israeli military fire after the Egyptian-mediated ceasefire was reached ending the 8-day Israeli war on Gaza.