Soldiers Kidnap 9, Including 3 Children, In The West Bank 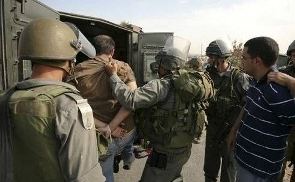 The Israeli army kidnapped late on Friday evening, and on Saturday at dawn, nine Palestinians, including three children, in different parts of the occupied West Bank.Local sources in Bethlehem reported that the army invaded As-Saff Street in the city, broke into and searched several homes causing damage, and kidnapped Abdullah Ibrahim Jawareesh, 18, Ayyad Jamal Al-Hreimy, 20, and Murad Ali Al-Asakra, 21.

Furthermore, the army kidnapped Mohammad Mahmoud Abu Al-Haija, 19, after ambushing him at the southern entrance of the northern West Bank city of Jenin. Abu Al-Haija is from Al-Yamoun town, west of Jenin.

The army first opened fire at a car transporting Abu Al-Haija causing damage but no injuries, and forcing it to stop before kidnapping him and taking him to an unknown destination.

In Azzoun town, near the northern West Bank city of Qalqilia, the army kidnapped three children identified as Qais Waddah Shbeita, 15, Mohammad Adel Shbeita, 15, and Mohammad Abdul-Fattah Radwan, 16. They were kidnapped as they were walking on the main street of their town.

On Friday evening, clashes were reported at the entrance of Beit Ummar town, near Hebron, when the army closed its main entrance; the soldiers fired gas bombs and rubber-coated metal bullets at several youths who hurled stones and empty bottles at them.

It is worth mentioning that on Thursday evening, Israeli soldiers kidnapped four children in Ash-Shuhada’ Street, in the center of Hebron city, and the nearby Beit Ummar town, in the southern part of the West Bank, and released two of them later on, but refused to release the remaining two.

The Palestinian District Coordination Office (DCO) in Hebron stated that two children who were released have been identified as Sanad Da’na 13, and Nimir Idrees, 13, were both released and were handed to the DCO.

In invasions and arrests are part of Israel’s ongoing violations against the Palestinians in the occupied territories.