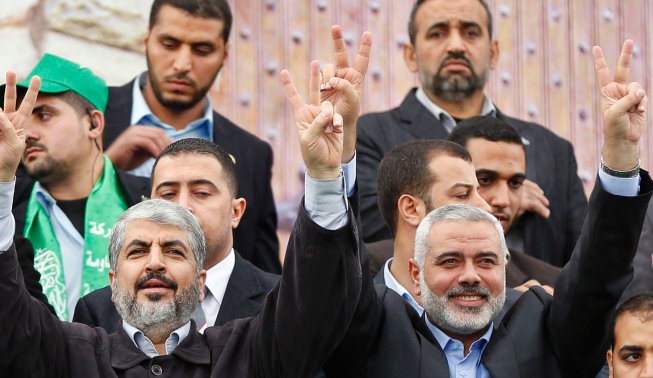 Speaking the massive celebration marking the 25th anniversary of the foundation of Hamas, in Gaza, Khaled Mashal head of the Political Bureau of the Hamas movement, called on the Arab countries to support the Palestinian resistance with “arms and money”, and said that “Palestine is from the river to the sea, and will always remain Arab and Islamic”.As for recognizing Israel, Mashal said that the occupation will never be recognized adding that “Palestine is ours and not for the Zionists”.

The Hamas leader also called on the Arab and Islamic countries to support the resistance in Palestine with weapons and money, and added that “resistance for the Palestinians is a means not an end”, and also stated that “should the world find a means that can liberate Palestine, liberate Jerusalem and achieve the Right of Return without resistance, then let them try”.

Mashal added that the Palestinians tried different means, including diplomacy throughout the 64 years of still ongoing occupation “but to no avail, but history teaches us that there will be no victory without resistance”.

He also “vowed” to act on securing the release of all Palestinian prisoners held by Israeli using the same means that secured the release of more than a thousand detainees in the Shalit prisoner swap deal.

Referring to the Right of Return of all Palestinian refugees, Mashal said that this is a legitimate and a holy right, adding that Hamas strongly opposes all attempts to settle the refugees in other places, or the idea of creating “an alternative homeland for the Palestinians”.

His statements were referring to some statements made by extremist Israeli leaders who hinted, and some clearly stated, that the Palestinians should settle in Jordan, or other Arab states.

On his part, Prime Minister of the Hamas-led government in Gaza, Ismail Haniyya, stated during the ceremonies that the fact that exiled leaders, like Mashal and others, who returned to Gaza, is part of the “military victory of Hamas, and the resistance”, and added that it is also a political victory that shattered the six-year Israeli siege on Gaza.

Haniyya added that “unity of the Palestinian people, and the unity of all resistance factions, played an essential role in this victory”, and stated that the dozens of fighters who died “paved the way for this victory, and for these missiles that struck Tel Aviv and many other places”, according to Haniyya.

Addressing the Palestinians in the West Bank, Haniyya said that “the power of Gaza, is your power, and is ready and willing to carry out your battles for your freedom, and dignity, as we are all one nation”.

It is worth mentioning that Hamas stated that more than 3000 guests arrived in Gaza in the last few days to participate in the celebration of Hamas, and that the guests came from Egypt, Saudi Arabia, Qatar, Turkey, Lebanon, Jordan, Malaysia, Kuwait, Bahrain, Algeria and several European countries.