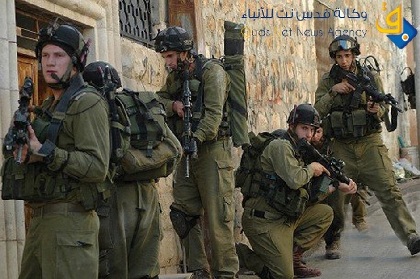 Local sources in Yatta town, south of the southern West Bank city of Hebron, reported that Israeli soldiers invaded the town, on Sunday at dawn, and kidnapped two Palestinian intelligence officers.The sources said that more than 30 Israeli military vehicles invaded the town shortly after 2, broke into the homes of the two officers, violently searched them, and kidnapped the two.

The officers were identified as Ahmad Ali Bheiss, 40, and Khalil Mohammad Abu Eid, 48. The two were cuffed and blindfolded before being kidnapped and taken to an undisclosed location.

Rateb Jabour, coordinator of the Popular Committee against the Wall and Settlements in Yatta, reported that the army recently increased its attacks against Yatta, and kidnapped several members of the Al-Aqsa Brigades, the armed wing of Fateh, who were previously wanted, and were pardoned by Israel after the group was disbanded in the West Bank.

Jabour also said that several residents and members of the nonviolent popular movement against the wall and settlements have also been kidnapped.

On Friday evening and on Saturday at dawn, the army kidnapped nine Palestinians, including three children, in different parts of the West Bank.