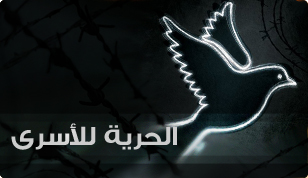 The International Solidarity Foundation for Human Rights issued a press release revealing that 18 seriously ill detainee, permanently at the Al-Ramla Prison Clinic are facing life-threatening conditions due to the lack of adequate and specialized medical attention and treatment.Foundation’s Lawyer, Mohammad Al-Aabed, stated that one of the detainees, Nahedh Faraj Al-Aqra’, 41, suffers from a mental illness while his right leg was amputated while serious wounds in his left leg are infected and not healing an issue that could lead to amputating it too.

He was taken prisoner on July 7, 2000, while he was returning from a Jordanian hospital where he received treatment, and was sentenced to three life terms; his family was never allowed to visit him since he was kidnapped 12 years ago.

Al-Aabed also said that detainee Ayman Taleb Abu Sitta, from the Gaza Strip, is suffering from a liver infection, and was hospitalized at the Soroka Israeli Medical Center before he was moved, 40 days ago, to the Ramla Prison Clinic. He was taken prisoner in 1994, and was sentenced to one life term.

The lawyer also said that detainee Ahmad Al-Awad, from Beit Ummar near Hebron, was shot and injured by four live rounds fired by the army before kidnapping him, and that the bullets struck him in the arm, abdomen and thigh.

Also, detainee Mo’tasem Raddad, sentenced to 20 years imprisonment, is still suffering from sharp stomach ache due to an injury he suffering during his arrest in 2006.

The International Solidarity Foundation for Human Rights said that the Ramla Prison Clinic is barely a clinic, lacks basic medications equipment, and is not even customized for disable persons, in addition to the fact that the prison guards and the administration repeatedly break into it and search it while harassing the detainees.