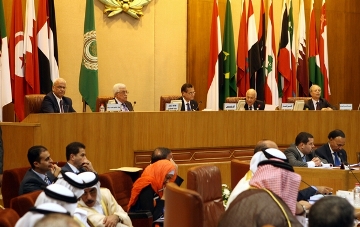 The Arab Follow-up Committee decided, during its meeting Sunday in Doha – Qatar, to immediately implement a decision that was made during the Baghdad Summit late in March this year, by immediately starting the transfer of $100.000.000 to the Palestinian Authority every month.Palestinian Foreign Minister, Riyadh Al-Maliki, stated that the Arab leaders made several important decisions regarding the situation in Palestine, including providing a $100 Million monthly financial safety net to the Palestinians.

The leaders formed a committee that includes the Prime Ministers of Qatar, Muhammad Al Thani, and Arab League Secretary-General, Nabil Al-Arabi, to ensure the implementation of these decisions.

Al-Arabi will be sending messages to all Arab Foreign Ministers so that their countries pay their monthly commitments; he said that Arab states will have this month’s $100 M. ready within two weeks.

On his part, Al-Maliki said that the actual monthly amount that Palestine needs is $240 Million, but the $100 M. decision was made at a previous summit.

He also said that the Follow-up Committee decided to prepare for the Second Paris Conference to ensure sufficient funding for Palestine, and the reconstruction of the Gaza Strip devastated by repeatedly Israeli wars and military aggression.

Al-Maliki also stated that the Arab leaders stressed on the importance that peace talks between Israel and the Palestinians must be based on all related legitimacy and international resolutions, and also stressed on the necessity to pressure Israel into stopping all of its settlement activities, and the release of all Palestinian detainees, mainly those who have been imprisoned since before 1994.

Arab leaders will also be forming a ministerial delegation that includes the Prime Minister of Qatar and the Arab League Secretary-General, along with any Arab leader who wishes to join, in order to hold talks next month with the UN Security Council, America, Russia, the European Union and China to ensure the release of the Palestinian political prisoners held by Israel, and to protect the legitimate rights of the Palestinian people, in addition to ensuring that Israel stops all illegal Israeli settlement activities, in the occupied West Bank and occupied West Jerusalem, as settlement construction and expansion mounts to a war crime and violates international Law .