Soldiers carried Out a Limited Invasion Into Khan Younis 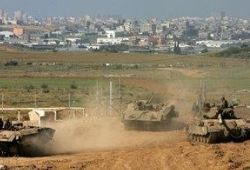 Media sources in the Gaza Strip revealed that Israeli soldiers carried out, earlier on Monday at dawn, a limited invasion into Palestinian lands east of Khan Younis, in the southern part of the coastal region.The sources said that six armored D9 Israeli military bulldozers, and several armored military vehicles stationed near the Sofa Terminal on the border with Gaza, carried out the limited invasion for the second time targeting the same area since the ceasefire was reached between Israel and the resistance in Gaza.

Also, several Israeli military helicopters and a few drones were seen and heard flying over the coastal region all though the nigh Sunday until morning hours Monday.

It is worth mentioning that the Palestinian Ministry of Health in the Gaza Strip reported that 191 Palestinians, including children, women and elderly, have been killed by Israeli military fire in Gaza in November, including those killed before the war, and that the number of injured Palestinians in the same month reached 1492.

The Ministry’s Health Information Center said that 48 children, including 16 under the age of five, have been killed by Israeli missiles and shells, in addition to 12 women and 20 elderly.

Furthermore, four Palestinians have been killed after the ceasefire agreement was reached, and 54 have been injured.