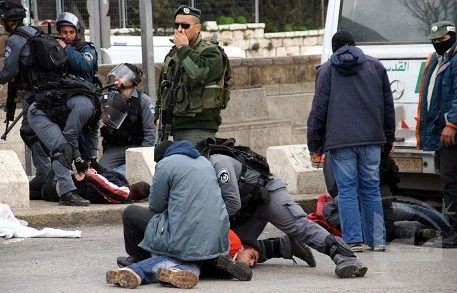 Local sources in occupied East Jerusalem reported that Israeli soldiers kidnapped, on Monday evening, five Palestinians, including a mother and her two daughters, in Qaa’ Al-Hara area, in At-Tour in occupied East Jerusalem.The army invaded the area and clashed with dozens of residents before kidnapping Nabila As-Sa’ou, 38, her daughters Tamara, 16, and Tamrleen, 15, in addition to two residents identified as Mohammad Daoud Abu Al-Hawa, 33, and Samer Qarawa, 31.

The arrests were made after the soldiers invaded the area to kidnap a Palestinian child, who allegedly hurled stones at settler vehicles driving nearby.

Eyewitnesses said that the mother of the child tried to defend her son, and the soldiers used pepper spray against her before kidnapping As-Sa’ou and her two daughters after the soldiers violently broke into their home.

The child that the army was trying to kidnap is a member of a different family that As-Sa’ou, also from Qaa’ Al-Hara area.

The army also fired dozens of gas bombs and concussion grenades, and broke windows in several homes before very assaulting several residents; no injuries were reported.