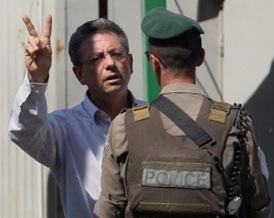 Dr. Mustafa Barghouthi, secretary-general of the Palestinian National Initiative, stated that the Israeli army’s invasion of the West Bank village of Ni’lin, near the central West Bank city of Ramallah, and the use of live ammunition against the civilians, is a direct implementation of statements made by senior Israeli government officials.Dr. Barghouthi’s statements came after Israeli soldiers invaded, on Tuesday at night, Ni’lin village, and shot two residents identified as Mohammad Hazem Khawaja, 18, and Khalil Srour, 18. Khawaja was shot, by a rubber-coated metal bullet to the head, while Srour was shot with a live round in the leg.

The Palestinian official said that the latest violation is a direct implementation of statements made by the Israeli Interior Minister, Elie Yishai, Israel’s Foreign Minister, Avigdor Lieberman, and Kadima Party head, Shaul Mofaz, who called on the Israeli army to use live ammunition in countering Palestinian protesters holing nonviolent protests against the Annexation Wall and settlement in the West Bank.

The Israeli officials said that the army should respond more firmly to the ongoing nonviolent and popular protests, also attended by Israeli and international peace activists.

Visiting the wounded at the Palestine Medical Compound in Ramallah, Dr. Barghouthi said that what happened in Ni’lin is an implementation of an illegitimate Israeli policy that legitimizes crimes against unarmed Palestinians.

He also said that the excessive use of force carried out by the army, and Israel’s ongoing assaults and violations against the Palestinians, their lands and property, will never deter the Palestinians from remaining determined to continue their nonviolent popular struggle against this brutal occupation, Israel’s Apartheid Wall, and Israel’s illegal settlements.