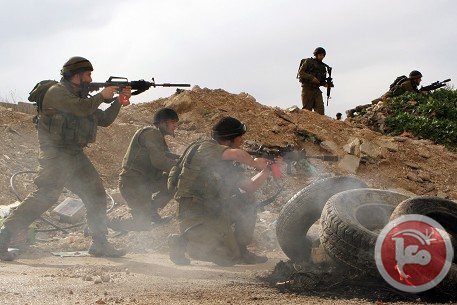 The Israeli army has modified its instructions to the soldiers regarding the use of live ammunition against Palestinian protesters in the occupied West Bank, allowing the soldiers in the field to make such decisions based on their situation, granting them more freedom in using live ammunition instead of gas bombs, rubber-coated metal bullets, concussion grenades and similar ammunition.Israel TV, Channel 7, reported that a senior Israeli military commander in the West Bank said that “a soldier operating in the field has the option to make the appropriate decision after evaluating the situation and the amount of danger he and his colleagues are facing, and that based on his personal evaluation, he can resort to the use of live ammunition”.

The recent modifications came after videos were published showing Israeli soldiers running away from Palestinian protesters in Kufur Qaddoum village near the northern West Bank city of Qalqilia, and in Hebron, in the southern part of the occupied West Bank.

It is worth mention that the Israeli Interior Minister, Elie Yishai, and head of the Kadima opposition party, Shaul Mofaz, demanded during a meeting of the Ministerial Council, known as the “The Cabinet”, that the soldiers should be allowed to use maximum force against the Palestinians.

Furthermore, an Israeli military source stated Tuesday that the “open fire” orders that the army has, are clear, and never imposed restrictions on the soldiers, and added that “the soldiers have to evaluate their situation in the field and act accordingly, if they feel that their lives are in danger, then they always can use live ammunition”, the Maan News Agency said.

Furthermore, military correspondent of the Reshet Bet Israeli Radio, stated that the army is currently investigating two incidents where Israeli soldiers were caught on film running away from Palestinian protesters, in Kufur Qaddoum, and a similar incident in Hebron where the soldiers had to hide in a local shop in the city.

The videos and images of those fleeing soldiers also granted a fertile ground for fundamentalist Israeli leaders like Foreign Minister, Avigdor Lieberman, and Elie Yishai, along with ring-wing columnists, who demanded a significant change in the open fire policy to allow the soldiers more freedom to use live ammunition against the Palestinians “in order to avoid scenes of defeat and humiliation of the soldiers of the Israeli army”.

Israeli soldiers use rubber-coated metal bullets, gas bombs and concussion grenades against nonviolent protesters against the Wall and settlements in the West Bank, in addition to spraying them with water mixed with chemicals, an issue that led to hundreds of injuries and even several deaths among the protesters.