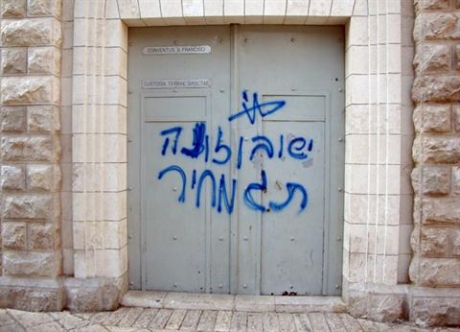 A number of extremist Israeli settlers wrote, on Wednesday at dawn, racist graffiti attacking Christianity and Jesus Christ on the walls of a monastery in occupied Jerusalem, the WAFA News Agency reported. The graffiti written on the walls of the monastery included “Price Tag”, and several insults against Jesus Christ. The settlers also punctured the tires of three vehicles parked near the monastery.

The attack is part of numerous attacks targeting churches, mosques and even graveyards in different parts of occupied Palestine, including occupied Jerusalem.

Back in October, Israeli extremists hurled stones, Molotov cocktails and trash at a Christian Church in occupied Jerusalem.

The attack came only a week after a similar attack that targeted the Franciscan monastery in occupied Jerusalem when extremist settlers wrote racist graffiti against Christians and Jesus Christi.

In September, extremist Israeli settlers burnt the main gate of the Latrun Christian Monastery west of Jerusalem, and also wrote racist graffiti against Jesus Christ and against Christianity.

Earlier in February this year, extremist Israelis wrote “Death to Christians” on the walls of a Jerusalem church, and slashed the tires of vehicles parked in the area.

Back then, Archbishop Attallah Hanna, of the Orthodox Christian Church, said that this assault is “a criminal act, and a very serious assault geared by blind hearts fueled by extremism and racism”.

Extremist settler groups are responsible for numerous racist attacks against the Palestinian people, their lands and their holy sites. Several mosques were torched and defaced in different parts of the West Bank, and racist graffiti against the Muslim Prophet was spray-painted. Also several Christian and Islamic graveyards were desecrated.

List Of Similar Attack Carried Out By Extremist Israeli Settlers

Tuesday at dawn, June 19: A number of extremist Israeli settlers burnt a local mosque in Jaba’ Palestinian village, in occupied East Jerusalem, and defaced some of its walls.

Local sources reported that the settlers wrote racist graffiti on some of the walls of the mosque, including the “Price Tag” graffiti that they frequently use when attacking and burning Palestinian mosques and property.

On February 20, 2012, settlers spray-painted racist graffiti on a church in occupied East Jerusalem in the third such incident since January 2012.

The graffiti also included “Death to Christians” and the phrase “price tag” was found on the walls of the Baptist Narkis Street Congregation. Furthermore residents of the area found their car tires slashed.

In February, the bilingual school Hand In Hand and the Monastery of the Cross were vandalized, and graffiti promoting violence against Christians was found on its wall.

On December of 2011, the settlers carried out four attacks against mosques in several parts of the occupied West Bank, and set ablaze five Palestinian cars near the central West Bank city of Ramallah.

In the attack on the mosques, the settlers spray-painted slogans including ‘Price Tag’, (a reference to the idea that Palestinians must all ‘pay a price’ for the dismantling of illegal settlement outposts by the Israeli military).

In mid-December of last year, a group of fanatic Israeli settlers burnt a mosque in Borqa village, east of the central West Bank city of Ramallah, and wrote racist graffiti on its walls.

The attack came only one day after a similar arson attempt targeted the historic mosque of Okasha in Jerusalem. Before setting parts of the mosque ablaze, the settlers spray-painted racist graffiti targeting the Palestinians and the Muslim prophet.