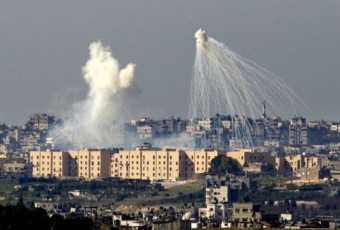 Palestinian medical sources in the Gaza Strip reported that two Palestinians were shot and injured, on Friday evening, by Israeli military fire close to the Israeli “security fence” east of Khan Younis, and Jabalia, in the coastal region. Eyewitnesses said that a 19-year-old youth was shot in the foot, east of Jabalia in northern Gaza, when Israeli soldiers, based across the border, opened fire at farmers working in the lands close to the border.

Another youth, 21, suffered mild-to-moderate injuries after being shot by Israeli soldiers stationed across the border with Khan Younis, in southern Gaza, and was moved to Nasser Hospital in the city, the PNN added.

The latest assaults are part of ongoing violations of the ceasefire agreement that came into effect November 21 ending eight days of Israeli war that led to the death of 172 Palestinians, while hundreds have been injured. Most of the casualties were civilians, including children.

The Israeli Navy also continued its violations against Palestinian fishermen, continued to open fire at them and to prevent them from fishing in Palestinian waters, and kidnapped dozens of them.

It is worth mentioning that the Palestinian Ministry of Health in the Gaza Strip reported that 191 Palestinians, including children, women and elderly, have been killed by Israeli military fire in Gaza in November, including those killed during the war, and that the number of injured Palestinians in the same month reached 1492.

The Ministry’s Health Information Center said that 48 children, including 16 under the age of five, have been killed by Israeli missiles and shells, in addition to 12 women and 20 elderly.

Furthermore, four Palestinians have been killed after the ceasefire agreement was reached, and 54 have been injured.

In related news, head of the Media Office of the Palestinian Government in Gaza, Ehab Al-Ghaseen, stated Friday that Israel fired three white phosphorous shells against the civilian population in Gaza during its latest war.

He said that international experts confirmed the usage of the shells, that are illegally banned against civilian areas, and added that local and Arab media agencies also managed to document these violations.

The official stated that the ministry department, in charge of documenting Israeli war crimes, has documents, reports and pictures received from several Arabic media agencies that could help the international experts in their examinations of the Israeli violation.

It is worth mentioning that Israel also used white phosphorous shells during the three-week war on Gaza, starting December 27, 2008.

1,419 Palestinians were killed during the war, and thousands were injured; dozens have now died of their wounds. The majority of the casualties were civilians, including infants, children, women and elderly, medics and journalists.