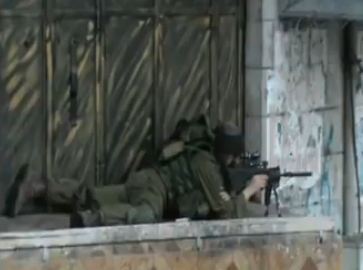 Israeli soldiers invaded, on Sunday evening, the southern West Bank city of Hebron, broke into and searched dozens of homes and kidnapped four youths before taking them to an unknown destination. The Youth Coalition Against Settlements stated that infantry troops invaded Jabal Al-Rahma area in the city and broke into several homes, forcing the families out and violently searched their homes before kidnapping the four youths.

The kidnapped youths were cuffed and blindfolded and were taken to the police station in Keryat Arba’ settlement built on Palestinian lands in the occupied city.

The army claimed that a Molotov cocktail was hurled at a military tower in the area; the Youth Coalition said that the military claim is false, and is part of a continuous Israeli policy targeting the residents in the city.

It is worth mentioning that the army also invaded Wad Al-Harya area in the city, installed several roadblocks and searched dozens of vehicles while interrogating the residents and inspecting their ID cards.

On Saturday, the army shot and wounded several Palestinians in Hebron, and kidnapped several local youths.

Dozens of soldiers were deployed in the streets of the occupied city and fired dozens of rounds of live ammunition, rubber-coated metal bullets, gas bombs and concussion grenades at local protesters, and at a number of homes in the city.

Last Wednesday, an Israeli soldier shot and killed a 17-year-old Palestinian youth on his birthday while he was on his way to buy a birthday cake.

The slain youth was identified as a Muhammad Ziad Awad Salaymah, 17, a student of the Palestine Circus School in the city.

The murder of the youth led to repeated clashes between the residents and the Israeli army leading to dozens of injuries.