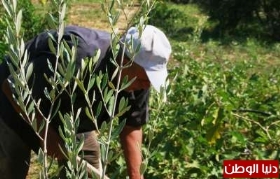 Israeli soldiers attacked, Sunday, dozens of Palestinian farmers working on their lands in Khan Younis, in the southern part of the Gaza Strip; damage was reported, no injuries.Local sources reported that the soldiers, stationed around 200 – 250 meters across the border fired rounds of live ammunition at the Palestinian farmers while working in their land close to the border fence.

Correspondent of the Press TV in Gaza, Ashraf Shannon, stated that the army opened fire at the farmers and the TV crew that was filming a report on the ongoing Israeli violations against the residents in the coastal region.

Shannon added that the army was unprovoked, and that the residents were just working in their farmlands when the soldiers starting firing at them.

On Friday evening, two Palestinians were shot and wounded when Israeli soldiers opened fire at them as they worked in their lands close to the border east of Khan Younis, and in Jabalia.

Press TV added that on November 21, its correspondent Akram Al-Sattari, was injured when the army conducted an airstrike targeting a hotel where dozens of reporters were staying.

The attack was carried out on the same day Egypt brokered the ceasefire agreement between Israel and the resistance in Gaza ending the eight-day Israeli military aggression in the coastal region.

It is worth mentioning that the Palestinian Ministry of Health in the Gaza Strip reported that 191 Palestinians, including children, women and elderly, have been killed by Israeli military fire in Gaza in November, including those killed during the war, and that the number of injured Palestinians in the same month reached 1492.

The Information Center of the Palestinian Ministry Of Health Information said that 48 children, including 16 under the age of five, have been killed by Israeli missiles and shells, in addition to 12 women and 20 elderly.