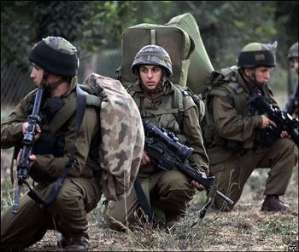 Israeli soldiers invaded, on Sunday at night, the town of Ya’bod, near the northern West Bank city of Jenin, and fired gas bombs leading to dozens of injuries among the residents.Local sources reported that the army invaded the Al-Raas area in the town, and provoked the residents leading to clashes.

Local youths hurled stones and empty bottles at the invading soldiers, and the army fired dozens of gas bombs; dozens were treated for the effects of tear gas inhalation.

Furthermore, the army broke into a local coffee shop that belongs to resident Ahmad Abu Bakr, searched the place and interrogated all of the customers while inspecting their ID cards.

The soldiers also invaded Al-Maloul area, west of the town, before imposing curfew on the entire town forcing the residents under house arrest.

On Sunday evening, soldiers invaded the southern West Bank city of Hebron, broke into and searched dozens of homes and kidnapped four youths before taking them to an unknown destination.

On Saturday, the army shot and wounded several Palestinians in Hebron, and kidnapped several local youths.

Last Wednesday, an Israeli soldier shot and killed a 17-year-old Palestinian youth on his birthday while he was on his way to buy a birthday cake.

The slain youth was identified as a Muhammad Ziad Awad Salaymah, 17, a student of the Palestine Circus School in the city.