Injuries Reported In Clashes Near Aida Refugee Camp In Bethlehem 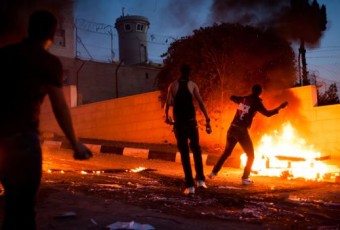 Palestinian medical sources in Bethlehem reported that clashes took place, on Tuesday evening, between local youths of Aida refugee camp, in the city, and Israeli soldiers; several residents were treated for the effects of tear gas inhalation while one resident was hit by a rubber-coated metal bullet in the head. The Palestinian Red Crescent in Bethlehem reported that medics transported a 25-year-old youth to the nearby Beit Jala Governmental Hospital, after he was shot in the head by a rubber-coated metal bullet fired by Israeli soldiers.

The youth is currently in a moderate but a stable health condition.

The Red Crescent added that the soldiers fired dozens of gas bombs and concussion grenades into the alleys of the refugee camp, and that dozens were treated, by local medics, for the effects of tear gas inhalation.

The soldiers also chased, and tried to kidnap several youths at the entrance of the camp, the Palestine News Network (PNN) reported.

The clashes in Aida started six days ago after and Israeli soldier shot and killed Mohammad Salayma, 17, in the southern West Bank city of Hebron.

Salayma was killed on his birthday as he went to buy a cake to celebrate with his family and friends.