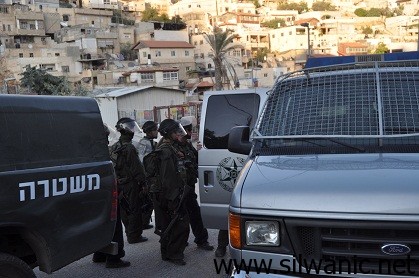 The Palestine News & Info Agency, WAFA, reported that Fatima Ja’afara, a Palestinian native of occupied East Jerusalem, voiced an urgent appeal for immediate action as Israel intends to demolish her family’s apartment building of five flats.Ja’afara stated that personnel of the Jerusalem Municipality, accompanied by dozens of Israeli soldiers, invaded the apartment building, on Tuesday evening, in Al-Jisir area in Silwan town, south of the Al-Aqsa Mosque, and handed her and her four sons military orders informing them that their residence will be demolished Thursday under the pretext of being built without a construction permit.

The apartment building is 400 square/meters, and is composed of two floors that contain five apartments, home to 30 Palestinians, mainly children.

The soldiers and police informed the family that they have 24 hours to vacate the property, and threatened to demolish the building even if the family fails to remove its furniture and belongings by then.

The Wadi Hilweh Information Center in Silwan, in occupied Jerusalem, reported that the building in question was built 12 years ago, and that the family has been trying to obtain a construction permit but Israel never responded.

The Center added that the family paid, so far, more than 100.000 New Israeli Shekels in fines imposed by the Jerusalem City Council.

Earlier this month, the army demolished a two-story building in At-Tour, in the occupied city.

The illegal demolition of dozens of homes in occupied East Jerusalem, and the settler takeover of Palestinian homes, in addition to the ongoing dire situation the Palestinian face in the occupied city, were among the reasons that pushed the Palestinian Authority in the West Bank to quit direct talks with Israel.

Other main Israeli violations include the ongoing and daily invasions and arrests in different parts of Palestine, the ongoing and escalating illegal construction and expansion of settlements, in addition to Israel’s refusal to hold talks on main issues such as the Right of Return of the Palestinian Refugees, borders, Jerusalem and natural resources.

Extremist Israeli settlers have also stepped-up their attacks not only against the Palestinians, their property and lands, but also against several mosques and churches.