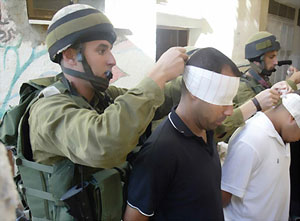 The Palestine New & Info Agency, WAFA, reported that Israeli soldiers kidnapped, on Wednesday at dawn, two Palestinians in the southern West Bank district of Hebron, and one resident in Bethlehem.WAFA said that the army installed several roadblocks in Hebron and around its nearby villages and towns, invaded Doura town, south of Hebron, and kidnapped one resident identified as Shadi Tawil, 21.

Tawil was kidnapped from his home after the army violently broke into it and searched the property leading to excessive damage.

Furthermore, media spokesperson of the Popular Committee Against the Wall in Beit Ummar town stated that the soldiers also invaded the town, searched several homes and kidnapped Issa Mohammad Awad, 21.

Local sources reported that the soldiers also invaded several neighborhoods in Hebron, and installed roadblocks at the entrances of the nearby towns of Halhoul and Sa’ir, north of the city, Ithna town west of Hebron, and the Al- Fawwar refugee camp, south of Hebron.

The soldiers stopped and searched dozens of Palestinian vehicles, and interrogated the residents, especially youths, while inspecting their ID cards.

Also on Wednesday at dawn, the army invaded Al-Mawaleh Mountain area, in Bethlehem city, broke into the searched a home and kidnapped one resident.

WAFA said that the army invaded the home of Awwad Mousa Awwad, and violently searched the property before kidnapping his son Mousa, 20.

In related news, soldiers invaded several homes in Sanour village, near the northern West Bank district of Jenin, and searched several homes. The army also handed a resident a warrant to head to a nearby military and security base for interrogation.

Soldiers forced the residents out of their homes, forcing them and their children in the cold, and searched their homes leading to excessive damage.
One of the invaded homes belongs to Mohammad Bassam Habayba, the Imam of the local mosque in Sanour.

Furthermore, dozens of soldiers invaded Jaba’ town, near Jenin, broke into and searched several homes; damage was reported, no injuries or arrests.

The latest invasions are part of ongoing and escalating Israeli military violations against the Palestinians, their lands and property, in different parts of the West Bank and the Gaza Strip.