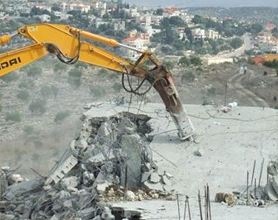 Israeli soldiers, and personnel of the Jerusalem City Council, distributed Sunday new orders against a number of Palestinian homes in occupied East Jerusalem.Local sources reported that the army invaded As-Sowwana neighborhood, near the walls of the Old City of Jerusalem, and imposed a tight siege on the area before posting the warrants on the doors of several homes under the pretext that they were built without construction permits.

Last month, Israel demolished two Palestinian homes, a barn and two wells, and handed demolition orders against four more homes, in the villages of Ad-Deerat and Al-Jawaya, south of Hebron, in the southern part of the West Bank.

Israel demolished since the beginning of this year 581 structures and 182 houses leading to the displacement of more than 1049 Palestinians.

The Israeli Committee Against House Demolitions (ICAHD) reported a few months ago that, in 2011, the army demolished 222 homes in the Gaza Strip and the West Bank, and 22 homes in occupied East Jerusalem. (The number of displaced Palestinians exceeded 1094).

During the three-week war on Gaza in December 2008 and January 2009, Israeli missiles and shells led to the destruction of 4.455 homes, displacing more than 20.000 Palestinians.