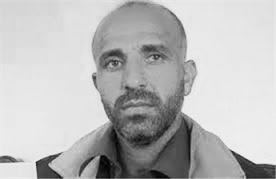 Palestinian Minister of Detainee, Issa Qaraqe’, stated that hunger striking detainee Ismail Sharawna, who started his hunger strike more than 162 days ago, and is facing serious health deterioration, decided to suspend his strike for ten days following medical advice, the Maan News Agency reported.Maan reported that different medical teams that visited Sharawna at the Ramla clinic advised him to suspend his strike as he could face sudden death, a stroke or paralysis and other serious health conditions.

Sharawna told Fadi Obeidat, a lawyer working for the Palestinian Prisoners Society (PPS) that he held talks with the Israeli Prison Administration, and added that he decided to grant them until the end of this month to fulfill their promises to release him along with hunger striking detainee Samer Al-Eesawy.

He added that should Israel retract its own promises, he will resume his open-ended strike.

Sharawna is facing a very serious health condition, his right kidney is not functioning while only %50 of his left kidney is functioning, and should he continue his trike he could lose both kidneys.

Physicians, who managed to see him, said that his body is feeding on its cells, his gallbladder stopped functioning and needs to be removed, and his intestines are not functioning at normal levels.

Obeidat said that Sharawna is facing very serious health complications, and that he currently looks like a skeleton, suffers from a form of amnesia, lost vision in his right eye, intense back pain, insomnia, repeatedly vomits yellow and sometimes black liquids, and is repeatedly dizzy in addition to the fact that he repeatedly loses consciousness.

In a letter handed to his lawyer, Sharawna said that he temporarily suspended his strike for ten days, and will be drinking one cup of milk, tea, and a bowl of soup each day in addition to vitamins (22 pills a day), 24 injections a day for eight days as prescribed by the doctors.

He will also be getting three injections a day for nerves, back, feet, kidneys and gallbladder.
As for detainee Samer Al-Eesawy, he informed Obeidat that he will continue his strike and will wait until this coming Thursday, December 27, which is a date of his trial, and will decide his next step depending on the court’s decision.

Obeidat said that doctors who examined Al-Eesawy stated that his health condition is critical, and that her organs are failing, in addition to intense pain in his back, muscles, continuous headache, and several other health conditions.

Samer is also unable to breathe in a normal manner, his blood pressure dropped to as low as 35, and is facing dizziness, fatigue, and other conditions; he recently started drinking water and vitamins.

He gave his lawyer a message stating that his dignity and the dignity of Sharawna is a main and crucial issue, and added “our battle of empty bowels is the battle of all detainees, all freedom fighters in the world, we prefer to die rather than living under oppression and slavery”, and called on the international community to intervene and save the Palestinian detainees from the ongoing illegal Israeli policies, violations and abuse.

Both detainees, as well as dozens of Palestinian detainees, are held under illegal Administrative Detention orders without any charges.