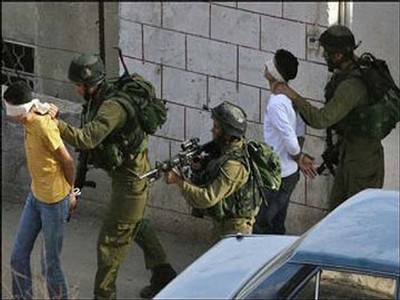 The Palestinian Prisoners Society (PPS) – Hebron branch, reported Sunday that the Israeli army kidnapped since the beginning of this month 88 Palestinians in the southern West Bank city of Hebron, including 12 children, and 18 patients.The PPS said that the Israeli army conducted numerous violations against the kidnapped Palestinians, including firing rounds of live ammunition in the course of their arrest, physically assaulted the residents, including beating them, kicking them, striking them with rifles and batons, an issue that led to serious injuries.

The PPS said that the army kidnapped, in December, 12 children in direct violation of article #40 of the International Convention on the Rights of the Child of 1989, kidnapped 18 patients and wounded Palestinians who were tortured and abused during interrogation.

The army also kidnapped 28 high school and college students, and moved 30 Palestinians from Hebron to a number of interrogation camps.