Israel To Displace 1000 Palestinians Next Wednesday 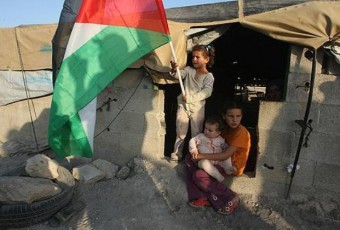 Head of the Wadi Al-Maleh area, in the northern plains of the occupied West Bank, Aref Daraghma, stated that the Israeli army intends to displace around 10000 Palestinian Bedouins in the area in order to conduct military training.Daraghma said that the Israeli army handed written military orders to the residents stating that they should leave as the soldiers will be using live ammunition in military drills in the area, the Palestine News Network (PNN) reported.

He added that the grazing area, inhabited by the shepherds, includes Wadi Al-Maleh, Ein Al-Hilwa, Al-Faw Valley, Al-Meeta, Al-Borj, and other villages.

The army informed the residents that they have until the morning of this coming Wednesday before the army conducts its trainings in the northern plains.

Israel performed similar military drills in the areas last summer forcing dozens of families to leave their homes seeking shelter in other areas until all drills were concluded.

Thousands of Palestinians have been displaced and repeatedly removed from the area since Israel occupied the West Bank in 1967. Israel also demolished dozens of entire villages inhabited by Bedouins and shepherds.