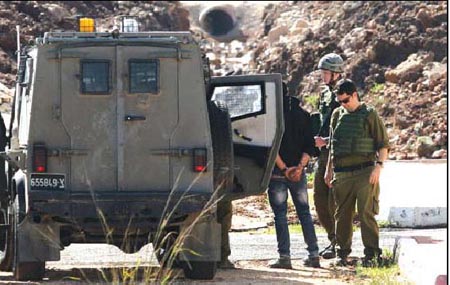 In the Gaza Strip, on 01 February 2013, 2 Palestinian children were wounded when the Israeli forces positioned along the border fence, east of Abu Safiya area in the east of Jabalya, opened fire at a group of persons, who were few meters to the west of the border fence.

In the context of other shooting incidents, during the reporting period, 5 shooting incidents were carried out against Palestinian farmers and collectors of gravel, steel and firewood in the northern border area on 03, 04 and 05 February 2013.

In the context of targeting Palestinian fishermen in the sea, the Israeli gunboats stationed off al-Waha resort, northwest of Beit Lahia, opened fire heavily at the Palestinian fishing boats twice on 03 and 04 February 2013. In both incidents, neither casualties nor material damage were reported.

3 members of the Palestinian Legislative Council (PLC) were among those who were abducted. Offices of al-Zakat Committee in Tulkarm and Islamic Awqaf (endowments) Department in Qalqilia were raided.

The Israeli forces established dozens of checkpoints in the West Bank.

At least 15 Palestinian civilians, including 2 children, a girl and a prisoner’s mother, were abducted at checkpoints.

The Israeli forces moved into Wa’er Abu Salah neighborhood in Beit Hanin village, surrounded a building that is resided by 4 families and demolished it completely. The 2-storey building was built on 210 square meters and included 4 apartments for 4 brothers and their families.

As part of settlement expansion projects in East Jerusalem and its suburbs, on 05 February 2012, the Israeli forces demolished facades and arches of a historic building that is located in the northern side of al-Buraq Wall. Al-Aqsa Foundation for Waqf [Islamic endowment] and Heritage mentioned that the Israeli authorities were planning to build a Jewish complex.

On 31 January 2013, a group of Israeli settlers, under the Israeli forces’ protection, moved into Sanour camp, south of Jenin near Jaba’ village, to perform Jewish rituals and withdrew later.

On 02 February 2013, a group of settlers from ‘Kiryat Arba’ settlement, east of Hebron, attacked 2 children from Jaber family while the children were in their commercial stores in the Old Town of Hebron. Half an hour later, an infantry unit moved into the area and abducted the 2 children in addition to a third person.

On 04 February 2013, an Israeli infantry unit moved into agricultural lands in al-Edisaarea, west of Sa’ir village in the northeast of Hebron. They denied persons from al-Mtour family access to their lands under the pretext that those lands were confiscated.

On 05 February 2013, the Israeli forces sent a notice to Hussein Mosa al-Hroub, 40, from Tarousa area in the south of Hebron, to demolish an under-construction house belonging to the aforementioned person.

On 05 February 2013, a group of settlers moved into the northern area of Deir Jarir village, northeast of Ramallah. They set fire to 2 vehicles in the village belonging to Khamis Mohammed Farakhna and Mosa Khamis Farakhna and wrote slogans that reads, ‘Jewish blood will not be shed in vain’.

On 06 February 2013, the Israeli forces demolished a water well belonging to Khalil Ahmed Hassan al-Ezza, 50, in Ein al-Delba area near al-Fawwar refugee camp, southeast of Hebron. The well was used for agricultural purposes.

In the same context, the settlers from ‘Zufim’ settlement, northeast of Qalqilia, started establishing a new outpost on lands belonging to Jayous village. It was supposed that these lands would be returned to their owners after the Israeli High Court had decided to change the route of the annexation wall in 2009.

During the reporting period, Israeli forces used force against peaceful demonstrations organized by Palestinian civilians and international and Israeli human rights defenders in protest at the construction of the wall and settlement activities in the West Bank. As a result, a child was wounded in a demonstration organize by the civilians of Kufor Qadoum village, northeast of Qalqilya on Saturday 02 February 2013, in solidarity with the people of Bourin village, south of Nablus, who started, with the help of local activists, building al-Manateer village on lands threatened with confiscation for settlement expansion projects.

Following the Friday Prayer on 01 February 2013, dozens of Palestinian civilians and international and Israeli human rights defenders organized a peaceful demonstration in Bil’ein village, west of Ramallah, in protest to the construction of the annexation wall. The demonstrators gathered in the streets of the village, chanting slogans calling for national unity. The protesters aimed to stress the need to adhere to national principles and the right of return, to resist the occupation and to call for the release of all Palestinian prisoners. The protesters raised Palestinian flags and made their way towards the lands adjacent to the annexation wall. The Israeli forces closed all ways and entrances to the village since early morning hours, to prevent Palestinians, journalists and international activists from joining the protest. The protesters raised Palestinian flags and made their way towards the wall. They called through megaphones for Israeli settlers in “Mitityahu” settlement to leave Palestinian land. Israeli soldiers stationed in the area fired rubber-coated metal bullets, sound bombs and tear gas canisters at the demonstrators. As a result, dozens of demonstrators suffered from tear gas inhalation and others sustained bruises.

Also following the Friday Prayer on 01 February 2013, dozens of Palestinian civilians and international and Israeli human rights defenders organized a peaceful demonstration in Ne’lin village, west of Ramallah, in protest at the construction of the annexation wall and settlement activities. The demonstrators moved towards areas of the annexation wall. Immediately, Israeli soldiers stationed in the area fired rubber-coated metal bullets, sound bombs and tear gas canisters at the demonstrators. As a result, dozens of demonstrators suffered from tear gas inhalation and others sustained bruises.

Around the same time on Friday, 01 February 2013, dozens of Palestinian civilians and Israeli and international human rights defenders gathered in the Martyrs Square in Nabi Saleh village, northwest of Ramallah, to hold a weekly peaceful protest against the construction of the annexation wall and settlement activities, entitled: ‘Freedom for Our Heroes in Israeli Jails.’ The protesters walked towards the gate erected by Israeli forces near the entrance of the village, which leads to Palestinian lands that Israeli settlers from the nearby ‘Halmish’ settlement are trying to seize. Israeli soldiers fired live and rubber-coated bullets, sound bombs and tear gas canisters at the protesters. As a result, dozens of demonstrators suffered from tear gas inhalation and others sustained bruises.

Also following the Friday Prayer, dozens of Palestinian civilians and international human rights defenders organized a peaceful demonstration in the center of al-Ma’sara village, south of Bethlehem, in protest at the ongoing construction of the annexation wall, entitled: ‘In Solidarity with Our Prisoners in Israeli Jails.’ As the protestors moved towards the gate of the village, the Israeli forces closed it to prevent the demonstration from gaining access to the confiscated land and attacked the participants; the soldiers assaulted the demonstrators with their firearms’ butts and their hands; as a result, a 10-year old sustained bruises.

At approximately 12:15 on Friday, dozens of Palestinian civilians and international human rights defenders organized a peaceful demonstration in the center of Kufor Kadoum village, northeast of Qalqilya, in protest to the continuous closure of the eastern entrance of the village since the outbreak of al-Aqsa Intifada.

The demonstrators moved towards the entrance of the village. Immediately, Israeli forces, stationed in the surroundings of the steel gate established at the entrance, fired tear gas canisters and sound bombs at the demonstrators; as a result, dozens of them suffered from tear gas inhalation.

Moreover, a lot of tear gas canisters fell into a house which is located near the closed gate. As a result, a number of his family members suffered from tear gas inhalation. Israeli soldiers abducted a man after punching him and transported him to an unknown destination.

At approximately 16:30 on Saturday, 02 February 2013, dozens of Palestinian civilians and international human rights defenders organized a peaceful demonstration at the eastern entrance of Kufor Qadoum, northeast of Qalqilya, which has been closed since the outbreak of the al-Aqsa intifada, in solidarity with the people of al-Manateer village, which was held at Bourin village, in protest to the threat of confiscating the lands for settlement expansion projects. Immediately, Israeli forces fired rubber-coated metal bullets and tear gas canisters at the demonstrators.

As as a result, Hakim Maher Abdel-Latif Shtaywy sustained cuts and bruises after he was hit with a gas canister to the chest.

The PCHR calls upon the European Union to activate Article 2 of the Euro-Israel Association Agreement, which provides that Israel must respect human rights as a precondition for economic cooperation between the EU states and Israel. PCHR further calls upon the EU states to prohibit import of goods produced in illegal Israeli settlements in the Occupied Palestinian Territories.