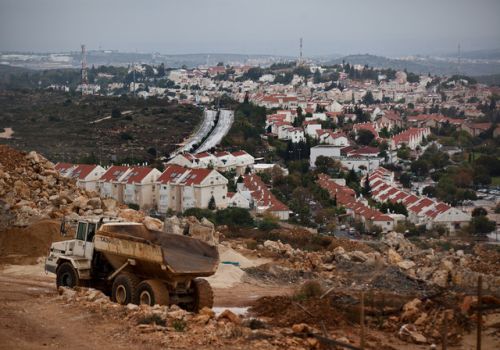 Israeli Defense Minister, Ehud Barak, approved on Friday the construction plans of a total of 869 units in Jewish settlements in the occupied West Bank, the Palestine News Network (PNN) has reported. Israeli sources reported that Barak approved 146 new units that would be built in Nokdim illegal settlement in the Gush Eztion settlement bloc in the West Bank.
Nokdim settlement is where former Israeli Foreign Minister, Avigdor Lieberman, lives with his family.

Lieberman submitted his resignation in December after corruption charges were filed against him.

Furthermore, Barak also approved the construction plan of 200 units in Tiqua settlement, built on Palestinian lands in the Bethlehem district.

The new approval came after Israel approved, in December of last year, the construction of 533 units in Gavot illegal settlement, in the Gush Etzion settlement block.

The construction plans are part of a larger construction plan that was prepared by the Israeli Housing Ministry 13 years ago, but the plan faced international criticism and was put on hold.

Last week, the Israel announced bids for the construction of a Mall in Jabal Abu Ghneim (Har Homa) illegal settlement, in East Jerusalem.

Also last week, Israel announced bids for the construction of 10 new units in Efrat illegal settlement in the Bethlehem District.

Israel’s settlements are illegal under international law and the Fourth Geneva convention to which Israel is signatory.

Settlements and the Annexation Wall in the occupied West Bank, and in occupied East Jerusalem, are turning the occupied territories into isolated cantons.

Also, Palestinian villagers who lost large areas of their farmlands are now isolated from what is left of their lands and require special permits from Israel just of enter their lands and orchards to plant or harvest them. In many cases, the needed permits were granted too late.