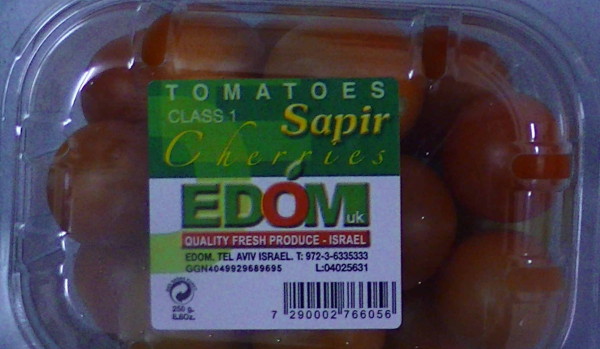 Jimmy Russo, the Company Chairman of EDOM, has told Corporate Watch that he plans to resign from his chairmanship and “actively seek to sell” his 20% shareholding in the Israeli company on Thursday, Feb. 7th. His announcement was in reply to questions about new evidence found by Corporate Watch that EDOM UK, which is an Israeli company (despite the misleading name), is packaging cherry tomatoes in the Israeli settlement of Beit Ha’arava in the occupied Jordan Valley.

According to the website WhoProfits.org, which tracks companies involved with Israeli settlements or contracted with the Israeli military, EDOM UK exports from a packing house in the settlement of Thomer.

Back in 2010 Corporate Watch urged Russo to divest his shares. The group wrote: “To continue to maintain shares in EDOM is to ignore the suffering of those who have lived their entire lives under Israeli apartheid and occupation. The only way to remain ethical in this context is to divest.”

In its 2010 report, Corporate Watch found that not only does Edom directly profit from the occupation by operating in the Jordan Valley, they also found immediate evidence of worker exploitation tied to their business when they talked to Palestinians in the area. According to two men working in the fields opposite Tomer, pickers working in the fields supplying Edom’s packing house get paid 60 Shekels a day -less than half the current Israeli minimum wage (which Palestinians are legally entitled to) and work on a day to day basis without contracts. The men also confirmed that children as young as 13 work with them in the fields where they pick tomatoes, cherry tomatoes, cucumbers and aubergines: all produce advertised by Valley Grown Salads through their UK web-site.

Russo, who is also the director of British company Valley Grown Salads (VGS), made the following “commitments” on 7th February 2013:

“1. I will confirm that I will resign as [EDOM] company chairman with immediate effect as I do not want my company, VGS receiving this constant harassment every year and being involved in political situations which are totally out of my control.

2. I will actively seek to sell my 20% stake holding in the company as the aggravation for no reward is not worth continuing with.”

Russo confirmed to Corporate Watch that VGS will not source goods from the West Bank in the future but says that the company will continue sourcing from EDOM and other companies in Israel.

Russo also pledged to answer questions put to VGS by Corporate Watch and other media outlets.

On 4th February 2013 Corporate Watch researchers visited Beit Ha’arava and entered a packing house where cherry tomatoes were being packaged. The majority of the packing house was taken up with packaging EDOM UK tomatoes. The tomatoes were labelled “Quality Fresh Produce: Israel” despite the fact that Beit Ha’arava is a settlement in the West Bank.

Corporate Watch contacted Jimmy Russo on 7th February and asked “Does EDOM/VGS source its produce from Israeli settlements in the Jordan Valley?”, and pointed out that the company had pledged in 2010 not to deal with the settlements any more.

“I can also confirm that VGS holds 20% stake in the company [i.e. EDOM] which was formed in 2003 as a vehicle to supply product from Israel at a time when the industry was experiencing chemical problems in Spain. The company has been extremely successful with the majority of the product going into Russia.”

Corporate Watch went on to ask Russo about what steps the company takes to ensure that products are labelled accurately. Russo responded:

“Regarding the question of labelling product from the West Bank, this I understand is part of a DEFRA/EU directive and because the product is going to Russia it does not come under the jurisdiction of the DEFRA/EU.”

“Regarding any professional status of Israel goods under the EU/Israel associated [sic] agreement I am not aware of any benefit whatsoever. For future reference the Managing Director has assured me all product leaving from that zone that is subject to labelling will be done so in accordance with guidelines provided.”

Corporate Watch said that it will continue to target EDOM and its remaining investors: Magnolia UK Holdings – 30%, Chosen Agricultural Products – 30% and Glinwell – 20% (suppliers to Tesco’s).