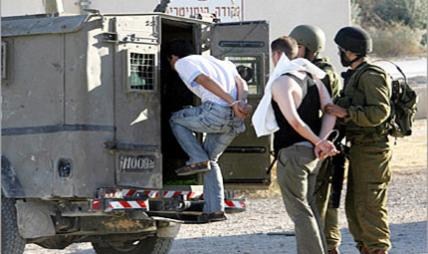 Mahajna is an officer with the Palestinian National Security Forces. Soldiers broke into his home and searched it after forcing his family out.

Local sources in Beit Duqqu, northeast of occupied East Jerusalem, reported that the soldiers kidnapped ten Palestinians after detonating the main doors of their homes, causing extensive damage and terrifying the residents.

The invasion was carried out by more than 100 soldiers.

Furthermore, army invaded Borqa village, near the northern West Bank city of Nablus, kidnapped one youth identified as Mohammad Fuad Hijja, and took him to an unknown destination.

Also on Wednesday at dawn, the army kidnapped one resident identified as Adham Abu Hadeed, 24, after breaking into his home in Abu Sneina neighborhood in Hebron, in the southern part of the West Bank.

They installed a number of roadblocks at main junctions in the city and on junctions leading to the nearby towns of ath-Thaheriyya and Halhoul, and al-Fawwar refugee camp.

Soldiers also closed the main entrances of Azzoun and Izbit at-Tabeeb, in the northern West Bank district of Qalqilia, and were extensively deployed in the main street streets preventing the residents from entering or leaving the invaded areas.

Late on Tuesday at night, clashes were reported on the main road linking between Nablus and Qalqilia.

On Tuesday at night, soldiers kidnapped Rafat Naseef, 46, a senior political leader of the Hamas movement in Tulkarem, in the northern part of the West Bank.

His arrest comes on three months after he was released from prison.

He was repeatedly kidnapped and imprisoned by Israel spending a total of eleven years in Israeli prisons.

Also On Tuesday, the army broke into a vegetables store in al-Ramadeen area in Hebron, kidnapped one youth and injured another.

Local sources reported that the army invaded the store of Nawwaf Daraghma and searched it an issue that led to clashes with local youths.

In related news, the army surrounded Azzoun village, east of the northern West Bank city of Qalqilia, and prevented the residents from entering or leaving it.

Late on Tuesday evening, the army installed a number of roadblocks, mainly at the eastern entrance of the village, and searched dozens of vehicles while interrogating the residents and inspecting their ID cards.

Soldiers claim that some youths hurled stones at a settler’s vehicle driving near the village, and that the driver was mildly injured.

Israel conducts daily invasions and arrests in different parts of the occupied East Bank, in direct violations of International Law.