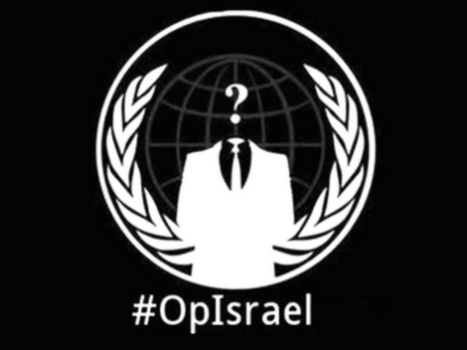 In the latest action targeting Israel, the international computer hacking network known as ‘Anonymous’ has claimed credit for publishing the personal information, including encrypted passwords, of over 600,000 Israelis as part of its ‘Operation Israel (#OpIsrael) on Friday.In November 2012, Anonymous published a video announcing the launch of a campaign called #opIsrael to hack Israeli websites and emails to try to bring an end to Israeli policies that it claimed were in violation of international law.

The campaign, according to Anonymous, is for the “children and families in Gaza that are suffering as a result of the policies of the Israeli government.” In addition to assaults on Israeli websites, the hacker group also provided Gazans with communications tools in the event their Intrnet connections were to be severed during the Israeli assault on Gaza in early December 2012.

As part of the campaign, hackers took down the Israeli military spokesperson’s website, and hacked into the Israeli Prime Minister’s site. The group managed to steal passwords, erase databases and deface websites of these and other Israeli government agencies as well as private groups.

The email provider that was hacked in Friday’s attack, Walla!, told Australia’s SC Magazine that they are working on “’hermetically’ sealing off user details in Walla! Accounts”.