40 Injured In Biddu Village Near Jerusalem 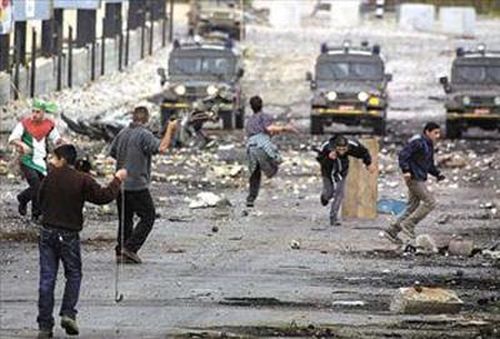 Saturday February 16; Palestinian sources reported that 40 Palestinians have been injured during clashes that took place when the army attacked Palestinians hold a protest in solidarity with hunger striking detainees, in the village of Biddu, northwest of occupied East Jerusalem.The clashes took place in an area close to the Hadashta illegal Israeli settlement, built on privately-owned Palestinian lands, the Palestine News Network (PNN) reported.

The residents were marching in support of all hunger striking detainees held by Israel, especially detainee Samer Al-Eesawy, who started his strike 209 days ago, and is in facing very serious health complications.

The army attacked the protesters by firing gas bombs and rubber-coated metal bullets at them leading to 40 injuries.

Earlier on Sunday at dawn, the army broke into the home of Al-Eesawy in Al-Isawiyya town in occupied East Jerusalem, and kidnapped his brother, Shadi.

Their brother, Midhat, is also a political prisoner held by Israel.