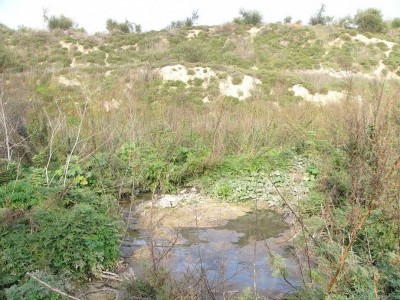 The Israeli settlement of Shafi Shamron, in the northern part of the West Bank, has routed its sewage pipes to dump directly into the historic village of Sabastiya, home to several thousand Palestinian families.The villages have filed a legal action in Israeli court against the settlement’s sewage dumping, but say that they do not expect the court action to succeed, since Israeli courts are weighted in favor of Israelis.

Sabastiya is an ancient city located just 10 km north of Nablus, West Bank. Palestinians have continuously lived in this village for nearly 2,000 years. But just over ten years ago, Israeli settlers decided to establish a settlement colony on village land and claim the land for the state of Israel.

According to the International Solidarity Movement, “Sabastiya contains Canaanite, Israelite, Hellenistic, Herodian, Roman and Byzantine ruins as well as the tomb of John the Baptiste. The winding city streets along with its history make Sabastiya an ideal place to visit. Yet, as charming and beautiful as the old city is, the nearby Israeli settlement of Shafi Shamrom is making lives of Sabastiya’s residents very difficult: settlers uprooted olive trees, introduced wild boars into the environment to damage the land, and most recently, sewage has started leaking from the settlement flooding Palestinian fields.”

In 2001 settlers uprooted and destroyed around 1000 olive trees, substantially damaging the land of several families. In 2006 the army put up a fence in an attempt to confiscate the land where the trees had originally been. Sabastiya’s farmers pulled the fence down in a defiant act of resistance and since that time there have been no further attempts to install it again.

The most recent action on the part of illegal settlers of Shafi Shamron is pumping their raw, untreated sewage directly onto Palestinian fields. As the sewage is absorbed into the land, olive and apricot trees are rendered diseased and, according to the residents, “poisoned”. The flow of human waste begins from a pipe on the perimeter of the settlement, creating a sort of reservoir which then runs through the adjacent Palestinian fields, compelling each subsequent land owner to create a canal in order to drain the sewage water on to his neighbors land and further away.

All Israeli settlements are considered illegal under international law, and are a direct violation of past signed agreements between the Israelis and Palestinians, as well as the Fourth Geneva Convention, which forbids the transfer of civilian populations to an area occupied by a nation’s military.