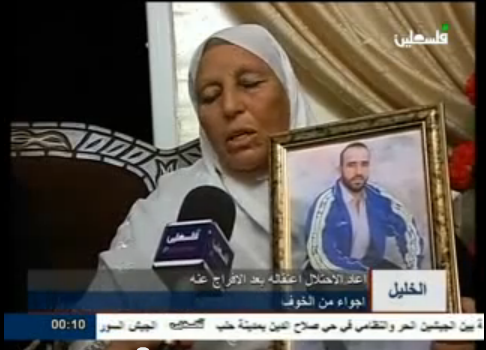 Palestinian Minister of Detainees, Issa Qaraqe’, reported Sunday that hunger striking detainee, Ayman Sharawna, was moved to the Soroka Israel hospital in Be’er As-Sabe’ (Beersheba), due to a serious deterioration in his health condition.Qaraqe’ told the Palestine News & Info Agency (WAFA) that the Ministry’s lawyer, Rami Al-Alami, visited at Sharawna, who was in solitary confinement in an Israeli prison before he was moved to the Soroka Israeli hospital after suffering a serious setback.

Qaraqe’ added that, last week, Sharawna fell into a coma, and when he regained consciousness, he suffered from extreme pain to several parts of his body, and was not able to move any part of his body.

Sharawna, 38, is demanding Israel to release him as he is being illegally detained without charges or trial.

He started his hunger strike on July 1 2012; 140 days later, he paused his strike following advice of Physicians for Human Rights, and resumed his strike on January 16 2013. He is currently only drinking water, refusing to even take vitamins.

Sharawna was released by Israel under the prisoner-swap deal that secured the release of Israeli soldier, Gilad Shalit, who was held by the resistance in Gaza.

The deal was implemented in two stages leading to the release of 1027 Palestinian detainees held by Israel. 280 of the freed detainees were serving life terms in Israeli prisons.

The deal was achieved after long and extensive talks mediated by Egypt, and was eventually brokered by Egyptian mediators, and was also supervised by the Foreign Intelligence of Germany.

Sharawna spent more than 10 years in Israeli prisons; Israel is now trying to reinstate a previous sentence against him despite the fact that his release as part of the swap deal voids any previous ruling against him. He started his open ended strike immediately after his arrest, demanding Israel to release him.

On Sunday, Sharawna told the visiting attorney of the Palestinian Prisoners Society, Yousef Matia, that Israel is trying to cause his death as the Prison Administration keeps placing him into solidarity confinement, and continuously moves him for one prison to another despite his very bad health condition.

He also complained that he is placed in a very cold room, which he described as a fridge, and added that the soldiers are not allowing him to sleep for more that 10 minutes each time, as they keep banging on the door, keep insulting a swearing at him, and in many cases place food in front of his room trying to break his steadfastness and determination.

Earlier on Sunday, Israeli soldiers broke into the home of hunger striking detainee, Samer Al-Eesawy in Al-Isawiyya, in occupied Jerusalem, violently searched the property, harassed the family and kidnapped his brother Shadi.

Their brother, Midhat, is also a political prisoner held by Israel.

Hundreds of residents were marching in support of all hunger striking detainees held by Israel, especially detainee Samer Al-Eesawy, who started his strike 210 days ago, and is facing very serious health complications.

The army attacked the protesters by firing gas bombs and rubber-coated metal bullets at them leading to more than 40 injuries.