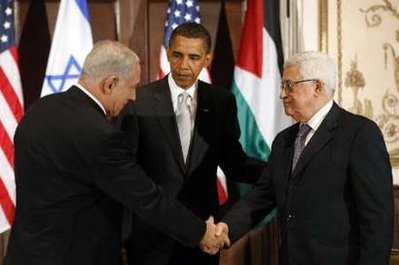 The Palestinian Authority (P.A.) in the West Bank intends to ask the United States to present a new peace initiative that could end the current stalemate in peace talks between Israel and the Palestinians.The Palestinian request will be officially made when American President Barack Obama, visits the region next month, Israeli daily, Haaretz, reported.

The U.S. will be officially informed of the Palestinian request by Palestinian envoys, headed by Chief Palestinian Negotiator, Dr. Saeb Erekat, and Mohammad Eshtayya, one of the advisers of President Mahmoud Abbas, who will be visiting the United States before Obama departs to the Middle East.

Haaretz added that the P.A. is hoping the U.S. will present a viable initiative that could lead to the resumption of direct peace talks with Tel Aviv.

According to Haaretz, sources close to the Palestinian President said that the P.A. is very disappointed that Obama has not presented any new peace initiative during his first term in office, in addition to the fact that the U.S. is granting the Iranian and Syrian file a higher priority, while marginalized the Palestinian issue.

Tel Aviv claims it is willing to start direct peace talks with the Palestinians without preconditions, but at the same time is ongoing with its daily invasions, violations, and is escalating its illegal settlement construction and expansion activities.

Israel is also escalating its invasions, attacks and arrests against the Palestinians, their homes and property, in different parts of the occupied West Bank, including in occupied East Jerusalem.