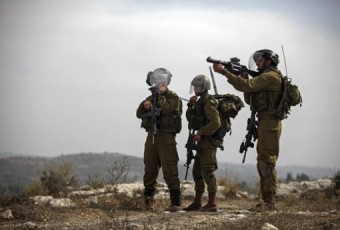 Eyewitnesses reported that the army fired dozens of gas bombs, concussion grenades and rubber-coated metal bullets leading to at least twenty injuries; some of the wounded were treated for the effects of teargas inhalation, while others were moved to the Hebron Governmental Hospital, the Palestine News Network (PNN) reported.

Furthermore, the army kidnapped a resident identified as Ashfar Abu Rmeila Tamimi, after breaking into his store in the center of the city.

The soldiers also fired gas bombs and rubber-coated metal bullets at Palestinian journalists in an attempt to force them out of the area. Army also occupied rooftops of several Palestinian homes in the area, and used them as monitoring towers.

In related news, six Palestinians from Hebron, including Sharawna’s mother and his three brothers, started a solidarity hunger strike.

Furthermore, Israel’s TV Channel 10, reported that one soldier was injured when Palestinian youths hurled stones at the army near the Al-Arroub refugee camp, north of Hebron. Soldiers opened fire and wounded a Palestinian child.

The Child, Salem Jawabra, 15, was shot by a live round to the foot, and was moved to a local hospital; several Palestinians have been treated for the effects of teargas inhalation.