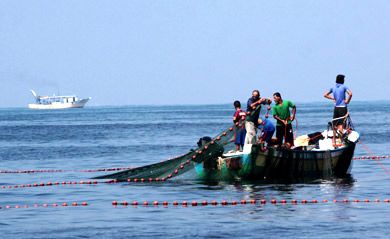 Palestinian medical sources reported, on Monday evening, that two fishermen have been moderately injured by Israeli Navy fire on the Gaza shore, in As-Sudaniyya, in the northern part of the Gaza Strip.The Palestinian Center for Human Rights (PCHR) reported that the attack took place within the 3 nautical miles allocated by Israel for Gaza fishermen.

As part of the ceasefire agreement that ended the Israeli war on Gaza in November 2012, Palestinian fishermen were allowed to fish within 6 nautical miles off the Gaza coast.

But the Israeli Navy continued to attack Palestinian fishermen leading to dozens of injuries, while dozens of fishermen were also kidnapped.

PCHR called on Israel to stop its violations, and to allow the Palestinian fishermen in Gaza to sail without attacking and harassing them.

Under the Oslo accords in the mid-nineties, the Palestinians are allowed to fish in 20 nautical miles off the Gaza shore, but in 2008, Israel unilaterally reduced the fishing area to 3 nautical miles.

Global Response to Israeli apartheid: A call to the UNGA from Palestinian and international Civil Society Organizations