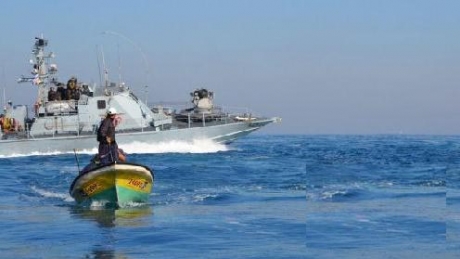 The Palestinian Center for Human Rights (PCHR) condemns the Israeli Navy’s escalation of attacks against Palestinian fishermen in the Gaza Strip and expresses its deep concern for such escalation, which resulted in arresting two fishermen and confiscating their boat today.According to PCHR’s investigations, at approximately 10:15 on Monday, 19 February 2013, an Israeli gunboat attacked a Palestinian fishing boat, boarding 2 fishermen, sailing 1 nautical miles off al-Sundaniya shore in the northern Gaza Strip.

The Israeli soldiers fired directly at the boat, cordoned it and ordered the fishermen on board to take their clothes off, jump into the water and swim towards the gunboat. Two fishermen were arrested: Mohammed Shihda Khalil Sa’d Allah (60) and his son, Mahmoud (23), from Jabalya town in the north of the Gaza Strip.

The Israeli forces confiscated their fishing boat as well. Immediately after capturing them, the Israeli forces handcuffed the fishermen, blindfolded them and transported them to Ashdod seaport. Both fishermen are still under arrest.

It should be noted that this incident occurred at approximately 1 nautical mile, which is within the 6-nautical-mile limit allowed by the Israeli forces for the Palestinian fishermen to sail and fish at, under the terms of the truce deal signed between Israel and the Palestinian armed groups under Egyptian and international auspices on 22 November 2012.

PCHR condemns the continuous Israeli attacks against Palestinian fishermen in the Gaza Strip, and:

1. Calls for immediately stopping the policy of chasing and arresting Palestinian fishermen, and allowing them to sail and fish freely;

2. Demands compensation for the fishermen for the physical and material damage caused to them and their property as a result of these violations;

3.Calls upon the international community, including the High Contracting Parties to the Fourth Geneva Convention of 1949 Relative to the Protection of Civilian Persons in Time of war, to intervene immediately to stop the Israeli violations against the Palestinian fishermen, and to allow them to sail and fish freely in the Gaza sea.