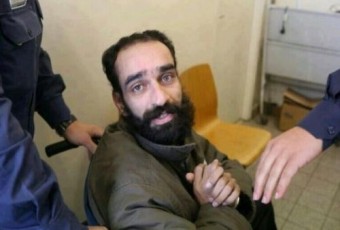 On Tuesday February 19, head of the Legal Unit of the Palestinian Prisoners Society (PPS), Lawyer Jawad Boulos, reported that the Israeli District Court in Jerusalem rejected an appeal for the release of hunger striking detainee, Samer Al-Eesawy. Boulos said that the court decided to keep Al-Eesawy is custody, until an official court ruling is reached within a month of this date.

Boulos said that Al-Eesawy was brought to the courtroom in a wheelchair, surrounded by dozens of armed Israeli guards, and when the judge asked him about “how he feels” he could barely utter a word due to his near-death condition resulting from his extended hunger strike.

Al-Eesawy, from Al-Isawiyya town in occupied East Jerusalem, repeatedly faints, and his current health condition was described as serious but stable.

Boulos also said that Al-Eesawy’s mother fainted, and fell onto the court in front of the courtroom, after seeing the bad health condition of her son.

El-Eesawy started his strike 210 days ago demanding his release as he is being held by Israel without charges.

On Sunday, Israeli soldiers broke into the home Al-Eesawy in Al-Isawiyya, violently searched the property, harassed the family and kidnapped his brother Shadi. Their brother, Midhat, is also a political prisoner held by Israel.

On November 18, 2011, Al-Eesawy was released as part of the prisoner-swap deal that secured the release of Israeli corporal, Gilad Shalit, who was captured by the resistance in Gaza. He was released after serving 10 years of a 30-year sentence made against him by an Israeli court.

On July 7, 2012, Al-Eesawy was rearrested at the Jaba’ Military roadblock, north east of occupied East Jerusalem, after the soldiers stopped a car transporting him following his visit to the West Bank city of Ramallah.

The Israeli District Court in Jerusalem is filing charges against Al-Eesawy for what it called “violated the terms of his conditional release by entering West Bank territory”, while the Ofer Israeli Military Court is demanding that that he serves the remaining 20 years of his 30-year term, and based its demand “on secret information” that neither Al-Eesawy, nor his lawyer, can have access to.

He was moved to the Al-Maskobiyya interrogation facility where he was subjected to ongoing interrogations for 28 days, and was not allowed to see his lawyer for 23 days.

In related news, hunger striking detainee Ayman Sharawna, from Hebron, was moved to the Soroka Israel hospital in Be’er As-Sabe’ (Beersheba), due to a serious deterioration in his health condition.

He started his hunger strike on July 1 2012; 140 days later, he paused his strike following advice of Physicians for Human Rights, and resumed his strike on January 16 2013. He is currently only drinking water, refusing to even take vitamins.

Sharawna was also previously released by Israel under the prisoner-swap deal that secured the release of Israeli soldier, Gilad Shalit, who was held by the resistance in Gaza, then recaptured for an alleged violation of his release terms.

The deal was implemented in two stages leading to the release of 1027 Palestinian detainees held by Israel. 280 of the freed detainees were serving life terms in Israeli prisons.