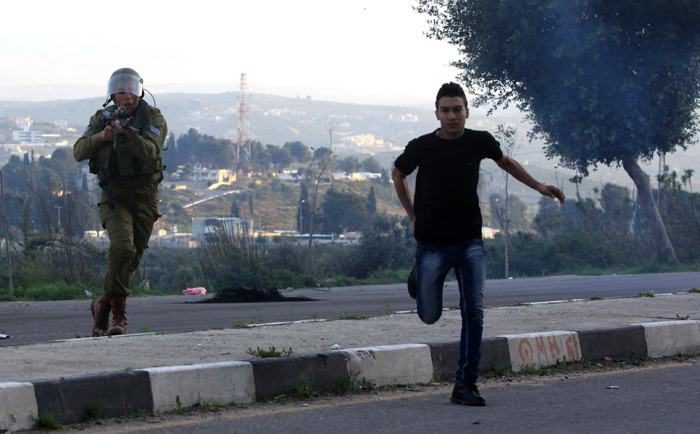 Israeli soldiers and Policemen attacked, on Tuesday evening, dozens of Palestinians holding a nonviolent protest, in occupied East Jerusalem, in solidarity with hunger striking Palestinian political prisoners held by Israel, and kidnapped two. Eight more Palestinians have been kidnapped near Nablus.The two kidnapped Palestinians have been identified Yassin Sbeih, 27, and Hasan Faraj, 32, local sources reported. The two were moved to the Police Station in Salah Ed-Deen Street, in the center of Jerusalem.

The Palestine New & Info Agency (WAFA) reported that dozens of Palestinians youths held a protest in Bab Al-Amoud area in East Jerusalem, raised Palestinian flags and pictures of detainee Samer Al-Eesawy, chanted slogans against the Israeli occupation, and called for the release of all Palestinian detainees.

The eight were taken prisoner after the army attacked a nonviolent protest held in support of the Palestinian detainees.

Furthermore, soldiers invaded Ya’bod village, south west of the northern West Bank city of Jenin, broke into and searched a home that belongs to a resident identified as Anwar Jawabra.

Soldiers also continued to occupy a home that belongs to resident Naseem Abu Bakr, for the third day in a row.

Local sources reported that the soldiers constantly harass the family, and that the army repeatedly prevents the residents in the area from leaving their homes, or even looking out through the windows.