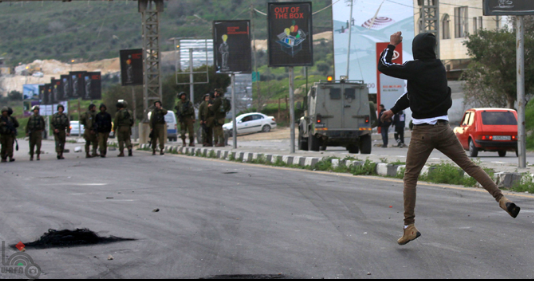 Ramallah – Tuesday February 19; Palestinian medical sources reported that several students of the Birzeit University, near Ramallah, were mildly injured after Israeli soldiers attacked a nonviolent protest held in support of Palestinian prisoners held by Israel.Local sources reported that the soldiers fired dozens of gas bombs and rubber-coated metal bullets at hundreds of students who marched towards the Ofer Israeli Prison, west of the central West Bank city of Ramallah.

The students were peacefully marching and chanting slogans against the Israeli occupation, and the ongoing Israeli violations against the Palestinian political prisoners.

The Students Senate of the Birzeit University stated that the students are determined to continue their protests in support of all Palestinian prisoners, especially those holding extended hunger strikes.

Similar clashes have been reported when the army attacked dozens of protesters near the Huwwara roadblock, south of the northern West Bank city of Nablus.

It is worth mentioning that four Palestinian detainees held at the Ofer Israeli prison decided, on Tuesday evening, to join the open-ended hunger strike; the four were moved into solitary confinement.

On Monday, at least 40 Palestinians have been injured after Israeli soldiers attacked several protests, held in solidarity with the detainees, in different parts of the occupied West Bank.

In related news, head of the Legal Unit of the Palestinian Prisoners Society (PPS), Lawyer Jawad Boulos, reported that the Israeli District Court in Jerusalem rejected an appeal for the release of hunger striking detainee, Samer Al-Eesawy.

Boulos said that Al-Eesawy was brought to the courtroom in a wheelchair, surrounded by dozens of armed Israeli guards, and when the judge asked him about “how he feels” he could barely utter a word due to his near-death condition resulting from his extended hunger strike.

El-Eesawy started his strike 210 days ago demanding his release as he is being held by Israel without charges.

Also on Tuesday, in related news, hunger striking detainee Ayman Sharawna, from Hebron, was moved to the Soroka Israel hospital in Be’er As-Sabe’ (Beersheba), due to a serious deterioration in his health condition.

He started his hunger strike on July 1 2012; 140 days later; he briefly paused his strike following advice of Physicians for Human Rights, and resumed his strike on January 16 2013.

Hundreds of detainees in different Israeli prisons and detention camps are weighing the possibility of conducting an open-ended hunger strike against the ongoing Israeli violations against them, and against Israel’s illegal “Administrative Detention” policy against hundreds of detainees held without charges.