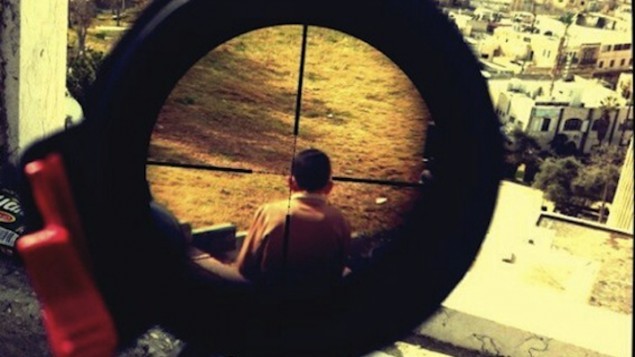 Mor Ostrovski, a 20-year old Israeli soldier in a sniper unit, published the image of the child in crosshairs. His Instagram account contained numerous other photos of him posing with his weapon, loading his weapon and even lounging on what appears to be a sofa in a Palestinian home, in full military garb.

The Israeli military spokesperson told the Israeli daily Yedioth Ahranoth that “this is a severe incident which doesn’t accord with the IDF’s spirit and values. The issue was brought to the attention of the soldier’s commanding officers, will be examined and properly handled.” But the military spokesperson added that this was not considered a criminal matter, and no charges would be filed against the soldiers in question.

According to Electronicintifada.net, which helped expose the disturbing photo of the child in a sniper’s crosshairs, “The statement by the army cannot be taken as an indication of real accountability or concern – the fact is that Israeli soldiers are almost never properly investigated or punished for harming Palestinians, let alone for such photos.”

As evidence for this statement, the author of the article pointed to an investigation by the Israeli human rights group Yesh Din which found that out of 103 investigations opened in 2012 into alleged offenses committed by Israeli soldiers in the occupied territories against Palestinians and their property, not a single one has so far resulted in any charges.

As for the soldiers involved in the two incidents over the last week involving disturbing photos published on the Internet, the one who published a photo of himself next to blindfolded detainees was told to remove the photos from his Facebook account and was suspended for 14 days.

The soldier who published the sniper photo of a child in his crosshairs was ‘disciplined’, although what that actually means was not detailed by the military spokesperson, who told Yedioth Ahranoth, “Since the documented offence isn’t criminal and since the legal procedure conducted by the soldier’s commanding officer was found appropriate, a disciplinary action was decided to be sufficient.’

In a similar incident three years ago, Israeli soldier Eden Abergil sparked outrage when she published photos on her Facebook page of what she called the ‘best time of her life’, which involved her smiling and pointing at bound and gagged Palestinian detainees.