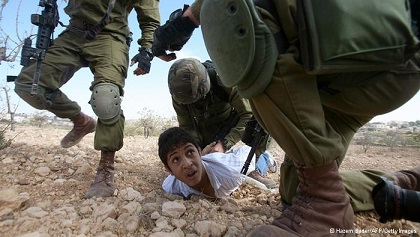 The report revealed that the kidnapped children have been violently attacked by the soldiers who invaded different cities, villages, towns and refugee camps in the occupied West Bank, and were moved to different Israeli detention camps and interrogation centers.

Furthermore, two Palestinian children were shot and injured by Israeli military fire near the border fence, east of Jabalia, in the northern part of the Gaza Strip.

Also, the report revealed that dozens of Palestinian children were injured by Israeli fire, and after being violently attacked by Israeli settlers.

It added that most of the wounded children have been injured when Israeli soldiers attacked weekly nonviolent popular protests against the illegal Israeli Annexation Wall and Israel’s illegal settlements in the occupied West Bank.