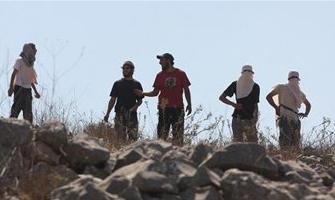 Wednesday February 20; several extremist Israeli settlers attacked Palestinian shepherds in Burin village, south of the northern West Bank city of Nablus, and in Hebron, in the southern part of the West Bank.Ghassan Daghlas, in charge of the settlements file at the Palestinian Authority in the northern part of the West Bank, reported that dozens of settlers of the Yitzhar illegal settlement, attacked Palestinian shepherds in Burin village, and hurled stones at them.

The settlers also hurled stones at several Palestinian homes and residents in the area, leading to clashes with the residents.

The shepherd, Khaled Abu Arram, 26, told the Israeli Information Center for Human Rights in the Occupied Territories (B’Tselem), that the settlers came from Mitzpe Yair illegal settlement, and attacked him while his sheep were grazing in Palestinian lands in the area.

The settlers also broke the camera of a B’Tselem volunteer cameraman as he was documenting their attack.

The latest attacks are part of ongoing violations carried out by extremist settlers against the Palestinians and their property in different parts of the occupied West Bank.